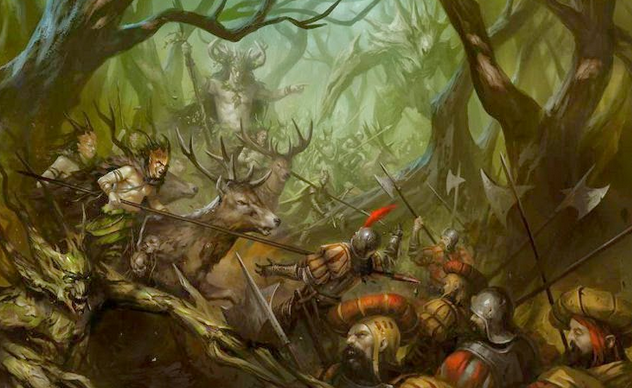 There was a question and answer session in German from someone that claims to have the Wood Elf armybook already. While its hard to tell if there is any credibility to it, we will just report on what is being said without stat lines or points.

There are also some pics leaking out that are deciphered from the Games Workshop's website. Really, GW needs to figure out that you just cannot change file names that are obvious or this community will figure them out. Here are some links to where you can find the pics. (I wont post up direct links to the GW site where these were taken)

A site that has most of the pictures up to see easier
http://diceandbrush.blogspot.com/2014/04/news-wood-elves-wave-2-pictures-glade.html

Please take these are rumors, as none of this can be confirmed and errors seem likely.

via MasterSplinter
translated from German
He says that he has seen the book. Woodelves get both prowess rules as long they are inside of a wood... asf also.
Attribute of high magic gives one additional wound to the caster or unit he is in.
Attribute of dark magic is: place a counter for each successfull hex-spell on an enemy unit. Unit will eceive 1d3 additional hits per counter when hit by a subsequent damage-spell.

Few new infos from tabletopwelt.de (user with aproximatly 1000 posts so credible?)
http://www.tabletopwelt.de/index.php?/topic/119980-waldelfen-treff-25/page-56
No more spites for characters as no more kindreds.
Most units can be equipped with magical arrows, allowing to shoot twice, flaming attacks, poisoned, armour piercing -3.
armour piercing for all bows every time.
Regular treeman is about the cost of a hellpit, little less. Ancient is about a hellpit and one and some rat ogres.
10 magical items confirmed.
Bow of loren is in. Arrow which does 3d6 shots is still in (but dont know the rules for it)
moonstone is in.
2 magical banners.
Dryads are strength 3 and have hatred
Wardancers seem to remain unchanged in costs and profile but get dances: +1 A, armourpiercing, killin blow, +3 ward save, enemy unit wont get ranks
Magical banners give MR (3) and once for a turn unbreakable
other one: vanguard and reroll first charge roll.
New archer hero slot: waystalker with dhw(this time dhw for real )
Branchwraith is the same ruleswise.


via herohammer
some stuff from the German thread I haven't seen here.

Spirit sword
Daith's rapier
Bow of Loren
Helm of the hunt
Acorn of eternity ( old item from 5th edition. It makes a forest if I remember correctly)
Moonstone of hidden ways
Hail of doom arrow
Some wand (wand of wytch elm?)
Banner of midwinter (same unbreakable until EoT one time only ability also now grants mr3)
A new banner that gives vanguard and extra charge distance n first charge of the game ( I think someone already posted this on above)

Dryads and the new wildwood rangers are both the same point cost and are 1/2 slave cheaper than the current cost of a glade guard. Glade guard same cost. Basic tree man is old treeman - 2 trolls + 5 slaves in cost. Ancient is old ancient - troll in cost and still is s6. Basic treeman is s5

Special:
War dancers
War hawk riders
Wild riders
Tree kin
Maidens of the thorn (or whatever they are called)
Wildwood rangers
Scouts (scouting skirmishing glade guard. Used to be an upgrade in core)

Rare:
Treeman
Eagle
Way watchers.
With only 3 units in rare it seems really barren but the German guy is sure the sisters/maidens/whatever are in special
4/29/2014
Natfka
Rumors, Warhammer Fantasy, Wood Elves