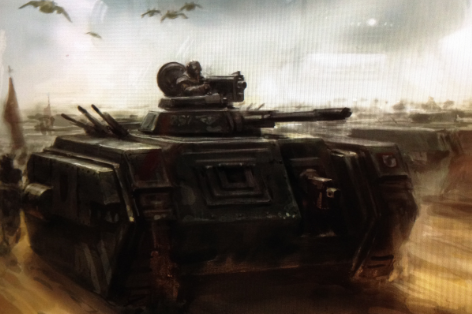 I have spent the last several hours pouring over the new codex, and there are some nice changes, and some that for lack of a better term... really suck. The best part of this codex though, is that through all of the codex, there is a lot of hidden nice little tidbits and combinations (beyond the obvious) that will play out extremely nice. Here is my First Look at the new codex.


I am not going to be listing out exactly what is in the codex. We have been talking about a lot of that already, so for the most part we already have a good idea of whats in there.

The Bad
Lets get the bad done and over with. On my list of just bad...... Hydras, Ordinance Batteries gone, of course no Marbo, no send in the next wave, Vendettas, Creed's loss of Scout, and the loss of Weaken Resolve.

Just to touch on why I see some of these as bad,
Hydras- 70pts, for skyfire, loss of auto-targetting system. Add an enclosed crew compartment for +15, and now you have 85pts for a worse than before vehicle for more points. Will I field them? what other choice do I have? not a whole lot.

Ordinance Batteries Gone- We knew this ahead of time, and it would not be such a big deal if Forgeworld models were better accepted in the community over all.

Creed- I just liked giving a unit scout. Too much fun. Sad its gone.

Vendetta- Yea, its more expensive and possibly correctly so. Still hard to swallow, but I know the general consensus hated hard on the 5th edition version. Once again, will I field it? not really much other choices.

Leman Russ- A lot of good is in this tank, and in the new codex. However, firing an ordinance still reduces your other weapons to snap shots. This is failure, and can only be seen as the design team choosing to keep these rules like this on purpose to limit the Leman Russ. (it is possible that a new rule set will fix this, but it should of been dealt with in this codex first)

The Good
Enough of that, as its time to let go, and see what opportunities are in the new codex. There are lots.

That really is some monster orders. I mean they are flexible, and can change the game in a heartbeat. With orders being so strong its hard to see someone choosing anything but other than Company Command Squads for HQ. We are lucky though....... a lot of the HQ selections do not use any force organization.

Now whats cool about this is that the abilities of some of these offer some unique abilities for a nice cheap point cost.
Primaris Psykers can be bumped up to level 2, and get access to divination, biomancy, pyromancy, and telekinesis.
Enginseers can give use awaken the machine, which gives a vehicle in 12" the power of the machine spirit. (more on this later)
Ministorum Priests- cheap and get access to all new War Hymns (unless you pay attention to the Sisters). This gives a lot of flexibility to the old mobs that we all love.

Chimeras. Lets talk transports, because many people are going to be rushing out to replace what looks like a used up more expensive transport. I just dont think so.

The new lasgun array allows you to use full BS no matter how far you are moving your chimera. Which means that you are firing at BS3 while moving 12". Granted its still just lasguns, but they can fire at different targets. Now add in a Enginseer within 12 of the tank. Give the chimera machine spirit and suddenly that hull mounted heavy flamer is able to fire since you are no longer snap firing. This also seems to allow the heavy flamer to hit one target, both lasgun arrays to hit seperate targets, and the then you can snap fire your turret and the hatch as snap firing shots. There may be a fail in there somewhere, but this is my first impression of the new Chimera rules (and its late).

Veterans. I like that the new Heavy Flamer additions are cheaper now. In fact they are half points. 10pts for a heavy flamer is a good investment, especially since you can still add two vets with special weapons to the mix. Not only that, but if you are moving your chimeras in fast as I mentioned above, a heavy flamer inside to help take out assaulting units helps.

I used to be a huge Veteran player. It looks like these are back in force, with cheaper upgraded doctrines, and flexibility. Demolitions is still 30pts, but hey, melta bombs and a demo charge still rock.

Platoons. Yes, they are still going to have some serious strengths behind the mobs and massed infantry squads that are available. Unlike the rumors, a special weapon can be taken. Add in the new Ministorum Priests and you have some rockin new rules for close combat.

One things of note. Sniper weapons are considerably cheaper now. Put them into a special weapons squad..... the old cost was 50pts for 6 guys with 3 sniper rifles. Now its 2pts per sniper rifle, so you are looking at 36pts per special weapons squad of 6 guys. Hard to pass on that as just some throw down units to hold backfield objectives and harrass the enemy.

Of course orders can be given from the Platoon command to enhance your platoons.

Scions. The Tempestus gives you a lot of nice orders from their own codex, if they are fielded with that codex. Here you are not getting the codex Tempestus orders, but instead the Astra Militarum orders. So when figuring out how to field Scions, take a very close look at the Tempestus codex and decide which will work out for you.

I like the Tempestus Platoons, and I think my Kasrkins will be seeing a lot of tabletop time this edition. Its just unknown for me yet, whether or not I will use the Tempestus codex for them, or the new IG.

Leman Russ. OK, they really need to fix Heavy Vehicles. This was ignored. We were told by good sources that this was going to happen a long time ago.

Otherwise the Leman Russ looks good for the tabletop if you just dont take ordinance weapons for your main gun. With the cost increase of a non-open topped hydra the Exterminator is now looking better and better.

Tank Commanders are also very cool in this edition. A nice addition. With pask you can get a BS4 with preferred enemy. That is just cool for many different variations of the the Leman Russ. There is some confusion about if the Commanders squadron must be selected as a Heavy Support Choice and then just counts as HQ during the game, or if taking a Tank Commander frees up another slot of for more Tanks.

Ratlings. Shoot and run. Shoot and run. Kind of cool, and we will see if that can work in lists or not. Sounds like a lot of fun and very fluffy. Once again sniper units coming in very cheap in this codex.

Armoured Sentinel. Really liking this. Finally the point cost seems to equal the value of the unit. I just love armoured sentinels, and I think these will be seeing some table time from me in this edition.

Well, Im tired, and this is plenty for a first look at the new codex. I have well over 8k in points of IG, and I think that this might very well bring a lot of my models out. Now to decide whether or not I can paint in mass to get some of my models ready for Valhalla or not. If I cant, my Dark Eldar will be fun to take.

BTW, Lots of great and fun artwork in the new codex. I do think for what is in it, I will enjoy the heck out of it, despite some of the loss.

There is another review that I thought I would link up over on Tabletop Wargaming.
http://www.talkwargaming.com/2014/04/new-release-codex-astra-militarum.html