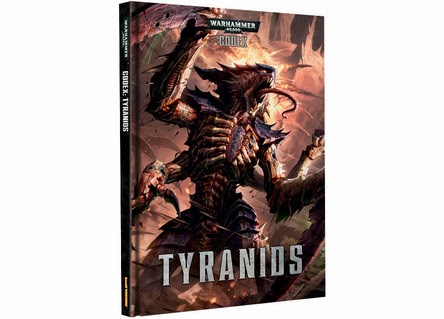 First off I am digging through the Enhanced Tyranid codex. The first things that have caught my attention with this codex, is that its just beautiful. The artwork in it is simply amazing, and the features of the enhanced version are just fun and exciting with a Force Requisition section as well. So yes, I like the ability to simply tap on the time lines of the each Tyrannic war to scroll down through them, and how quick it is to pull up rules alongside each unit in the ipad versions. So the quality of the book is good.

Now the first thing that bugs me about the Tyranid codex is regarding allies. Unless something major is changing in the allied world very soon, Tyranids are once again stuck with their own codex with no Foc modificitions or anything else creative. This alone would not be bad, if the codex stood strongly on its own, but at first glance, and from other reactions, it does not.

So that alone is my biggest disappointment in the book. I feel that something creative should of been done, and could of, and that the opportunity was missed. Even if something is coming in the near future, like dataslates or codex supplements, you just can't rely upon those extra books to sell a codex, especially a stand alone Tyranid codex.

Now a lot of units got cheaper in this codex, and that alone is a bigger positive than the community gives credit. It means that more can be fielded, often becoming a force multiplier. Its still too early to tell what this will mean, but I can definitely see whole armies around carnifexes which are significantly cheaper.

Some of the new exciting units, like the Hive Crone and Harpy, are extremely vulnerable to Quad Guns, and even with 5 wounds, these flying monstrous creatures will be hard to keep alive fighting on the tabletop. A toughness of 5 just doesnt hold up. If one comes in range of rapid firing bolter fire, there is a good chance to wound the beast, if not drop it out of the sky where it is sure to die.

Now if the Hive crone does get shots off, these creatures if they can avoid ground fire, will destroy other air targets quite well. S5 AP5 missiles with re-rollable Tentaclids are just cool. Yea, they should of been BS4, but twin linked will help.

I will get more into the codex over the next few days, but Tyranid players are up for a challenge with this codex. It is definitely not a plug and play codex (obvious units in every list). While first impressions are relatively weak, it may end up being just one of those codices that require some skill to play and build strong lists for. So until we start hearing more, and I start digging into this codex, I will keep my mind open. This codex will be challenging for players, and perhaps in the end there will be some hidden strengths and tactics that win out.