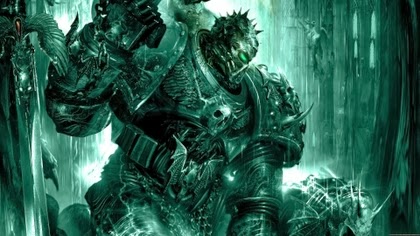 A sighting of a new box set for Chaos Space Marines and Chosen? Of course its a rumor, but any sort of update to the models would be a lot of fun and nice to get. Of course a dual box set would make sense, and to finally get some ornate chosen models that are not in Dark Vengeance would be of value.

via an anonymous source on Faeit 212
Got a bit of a news item for you. I've seen a few pictures of a sprue with a number of finished models. The sprue and models in question are for a new chaos space marine infantry kit. They are supposedly intended to be a replacement for the standard chaos infantry kit but also have options for chaos chosen within the kit ala the space wolves packs' wolf guard.

Design wise the models seemed to be a mix of ornate and non ornate armour pieces. There were a number of power weapons, combi weapons and what looked to be an autocannon in plastic. I was told that hopefully their release would not be far off and would be released with a few other chaos kits.
1/19/2014
Natfka
40k, 6th Edition, Chaos Space Marines, Warhammer 40k