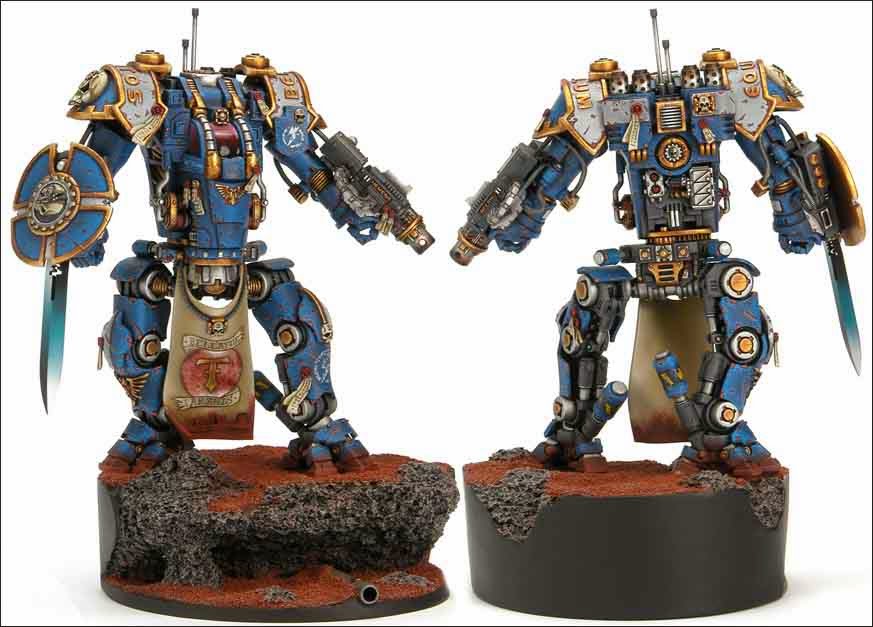 There has been rumors in the past that we would see Imperial Knights coming, and for the most part, we have taken them as speculation. Today 40k radio who generally has good sources, has said that we will see the Imperial Knights released.


We have been seeing more and more codices get larger models, the Imperial Knights are small one versions of Titans. The pic above is a custom model from Warhammer 40k wiki site by Vforvendetta1.

Assuming of course that these Imperial Knights will be available through a new Imperial Guard codex, consider myself down for two.

As you may have seen on other sites Febraury is all about the Dwarfs. So for you fans of the short and bearded get pumped. March will see the release of Imperial Knights. This year is shaping up to be a good one.


Imperial Knights
via Warhammer 40k wiki
http://warhammer40k.wikia.com/
A Knight is a walking, humanoid war machine first used by the Mechanicus on its affiliated Knight Worlds. The Knight is crewed by a single pilot and while they are larger than most other Imperial vehicles, they are smaller than even the smallest class of Scout Titan. There are several different types of Knight walkers in use, including the:

Knight Warden - Knight Wardens are armed with long-ranged, heavy weapons and are well-armoured. They are used as defensive weapons against enemy attackers.

Knight Paladin - The Paladin Knight is armed with both ranged and close-combat weapons. They are commonly equipped with Battle Cannons and large Chainswords.

Knight Lancer - The Lancer Knight is a scout unit, armed with a single Battle Cannon and a Power Lance though it is capable of achieving much higher overland speeds than the other pattern of Knights. These Knights are commonly used to outflank enemy units during a battle.

Knight Crusader - The Crusader Knight is armed with heavy weapons intended to be effective against enemy armouredvehicles. A Crusader Knight is usually armed with Lascannons and have increased armour to better withstand the assaults of potent armoured vehicles. They are the slowest and least nimble of all the patterns of Knight.

Knight Castellan - The Castellan Knight is the tactical opposite of the Crusader Knight and is armed with weapons effective primarily against enemy infantry, such as a multi-barreled Autocannon.

Knight Errant - The Knight Errant is armed with heavy weaponry and is the most potent of the Knight patterns, capable of fighting enemy super-heavy vehicles and even Titan-sized foes such as Ork Gargants.


Knight Baron - The Knight Baron is piloted by a superior warrior with razor-sharp combat and Knight-handling skills. A Baron Knight usually leads a Knight squadron into battle. As a sign of their command status, every Baron uses a Knight custom built to their exact specifications. These Knights are usually armed with rapid-firing Battle Cannons and a Power Lance.
1/23/2014
Natfka
40k, 6th Edition, Imperial Guard, Rumors, Warhammer 40k