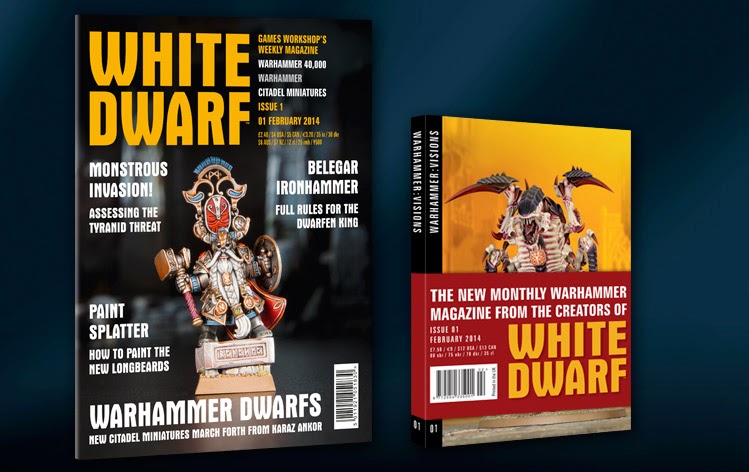 The magazines are out now, and people are getting their first magazines. There is a huge difference between Warhammer Visions and White Dwarf weekly when taking a look at the first editions of the magazines.


Just got my hands on the new Warhammer: Visions, and to be honest, I feel there will be a lot of disappointed people on Saturday.
This issue is basically a large picture book of last months releases, there are no articles whatsoever, just page upon page of pictures with descriptions. Also, it's multilanguage, the UK edition has comments in English, French and German.
Also, worth noting, the Battle Report within the pages is going to get a lot of flak. It is basically about 4 pages of pictures and then a result at the end, no points, no description of what is going on, just annotated photos.


Warhammer Visions is a new monthly magazine, and from the first impressions I have seen and read, its largely a pictorial showcasing of GW models. In fact people will be surprised on just how little is said in the magazine, especially since the magazine is written in English, German, and French (on each page). While inspiration pics are nice, there is so many pics, that there is little else in it. Its no wonder there are so many armies missing from Warhammer World's display cases. Wondering why Grey Knights were not there...... out for photos for the new magazine. So if a lot of pictures of models is what you are looking for, this is your magazine.

White Dwarf weekly is very much the same magazine, now released every week, and with rules added, which we wanted. It seems that this is the magazine people will be interested in, rather than visions. It focuses on much the same as before, with releases, pics, and battle reports. While its nice that there will be a digital edition, I think White Dwarf weekly is where most hobbyist would want a subscription to, if only they could.

Thanks to CrAzY424 from the 40k Warzone for pointing us to this video.

Now to be fair, this is what GW has announced for the magazines. This is from their website, so if you were expecting something else, then obviously we were not paying attention.


White Dwarf, now weekly.
Available exclusively through Games Workshop stores, independent retailers, and games-workshop.com. White Dwarf is an exciting and essential weekly hobby magazine that contains something for every hobbyist, every week - guaranteed!
·    36 pages of everything that is exciting and new in the hobby this week.
·    Detailed information on all the week’s other new releases, and the latest hobby news.
·    New features, new modelling and painting techniques, new rules, new columnists and much more.
·    All this every week for the same price as a single Citadel pot of paint!
Issue No.1 launches Saturday 1st Feb and subsequent issues follow every Saturday


Warhammer: Visions, now monthly.
Experience a visual feast of super high-quality Citadel Miniatures.  In more than 230 pages you’ll find a completely new take on the worlds of Warhammer and Warhammer 40,000 in a stunning new extended pictorial style.
·    Contains all your favourite sections from Army of the Month and Blanchitsu, to Kit Bash and Paint Splatter.
·    Over 70 more pages than the previous monthly White Dwarf with more Golden Demon and Armies on Parade photos and more fantastic photographs of Citadel miniatures than ever before.
And it’s wrapped up in a fabulous new format that you will want to keep and collect! Issue No.1 out Saturday 1st February