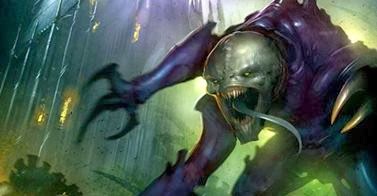 The new Tyranid Vanguard is the first of three new codex dataslates that is scheduled for Tyranids. The first of these Games Workshop today gave a preview of the contents that include 5 new formations for Tyranids. This could very well be the biggest of all the new Dataslates released to date.

The image above is a released image from the GW and the Black Library for the new Dataslate.

First off here is the link that provides some insight to the new formations and contents of the dataslate.
http://www.blacklibrary.com/Blog/Vanguard-of-the-Leviathan_.html

The new release Tyranid Vanguard starts off with some background into the infiltrators of the Tyranid Hive Fleets and the narrative will continue through each of the Leviathan Dataslates. The first includes battles against the Catachan defenders, as well as the Aurora Space Marine chapter. Of course a Vanguard force would not be complete without including Deathleaper.

via Eddie on the Black Library Blog


The next section contains five new Datasheet formations that give you new ways to use your Tyranids collection in games of Warhammer 40,000. These are primarily aimed at allowing you to represent the insidious tactics of Leviathan’s vanguard attacks against Satys. However, you could just as easily use a single formation alongside your standard Tyranid detachment, or even use them all together to create a super-sneaky army of Tyranid stealth specialists (they came out of the trees!).
There are five formations in total, all of which link back to the Tyranid swarm’s tactics from the background section of the book. My personal favourite is ‘The Broodlord’s Hunting Pack’, a group of Genestealers led into battle by a single malicious and utterly predatory intelligence.


Finally there are two echoes of war missions, and the Black Library let out the name of our next dataslate for Leviathan Rising: Tyranid Invasion
1/23/2014
Natfka
40k, 6th Edition, News Headlines, Tyranids, Warhammer 40k