Comments about the Games Workshop Campaign 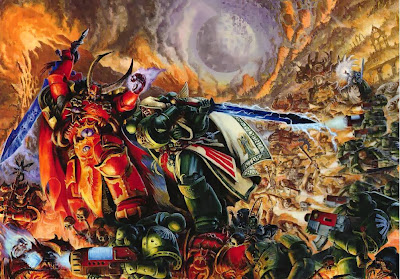 JD Welch has been around this site for a long time, and the community. He has a first hand look at the new Games Workshop Campaign, Conquest of Kaiserslautern VI going on right now in beta form. I have gathered up all his comments about the event and presented them below.


These are beyond rumors, and are in fact going on right now.

via JD Welch from the Faeit 212 Comment Section
Number 1
This is a beta test in the USA only in ~28 stores that were hand-selected by the sales reps. Each rep got to nominate 2 of their stores. It is being conducted in Independent stores, not GW stores. It is an opportunity to get more players involved in "organized play". Of course, being GW, they want to sell more models, but the idea of having organized play that is NOT tournaments that is supported by GW is Awesome.

There's a bunch of free swag that will be given out to the participants. If you're familiar with what Privateer Press does for WarmaHordes, this is the same idea: Organized League Play around a common theme.

In the PHX area the store that was selected for this is Empire Games in Mesa, AZ. We are well underway, with over 53 participants signed up and playing games. The first "League Night" was a huge success, with the store being absolutely jam packed with people playing 40K, a lot of whom I've never seen before (I'm a regular).

The key to the success of this beta program will be the feedback that we, the community of players, gives to GW. So if you're lucky enough to live near one of the 28 stores selected for this beta test, get your game on, write up your feedback, and let Nottingham know that we WANT more of this kind of thing for our community!

Number 2
Folks, it's not as formal as you're trying to interpret it to be. This is a Beta test of "Organized League Play" to get people to get out, hobby more, and get in a bunch of ~friendly~ games around a themed set of scenarios. You don't have to use the specific scenarios, but you do get extra points for playing with fully painted units, building & painting a new unit during the event, hobbying/painting in the store, etc. this write up by DamnTheValley is very good and spot on.

My FLGS in the PHX area, Empire Games in Mesa, AZ, was selected for this, too. We were told that about 28 stores in the USA were hand selected by the US sales team, who thought up the idea. We got over 53 people signed up for the event in just a few days after the manager of Empire Games was able to announce it to us! Last Friday was our first "League Night", and the store (over 20 tables in the store) was absolutely packed with people playing 40K. It was awesome! I'm a regular, and I saw a lot of unfamiliar faces packed in table-by-table playing, and it was very encouraging.

The key to the success of this beta, and it being sold to GW Corporate and turned into a regularly-occurring event, will be the (positive) feedback from the participants, the players. We want GW to know that we want these kind of friendly, non-tournament leagues run regularly with support from GW (read: Swag!), and we think this is an EXCELLENT idea. But it will depend on those of you who participate to do your part and fill out the feedback forms that you will get from your FLGS so they can send that in to GW USA (by January 31st).

The beta is only for a month, this month, but the idea is for quarterly "leagues", or "campaigns", if you will.

I really hope this idea takes root and that we will get the kind of support from GW for these League events that the Warmachine/Hordes players get from Privateer Press...


Number 3
Oh, yeah, about the games. Since it's GW, the scenarios that are presented are geared around the forces you get in the DV starter set, since GW is a bit myopic about just recruiting new players. At Empire, the only rules are that you need to play a game of at least 1,000 points with someone else in the league for your "points" earned to count, and you can play up to 3 games in each week (3) towards each week's scenario and ability to earn points. There will be swag given out after the last week, something for everyone, but the more you play and hobby, the more points you can earn. After that, I'm not certain of the details. Also, I'm pretty sure most of the stores selected have tailored the "rules" of the league/campaign to suit their local communities.

One thing I'd like to get across to GW is that we veteran players are responsible for a LOT of the revenues that our FLGSs bring in. We don't just buy one army and stop collecting, but keep adding to our forces, trying out new things, and with the allies rules, trying out new and different allies combinations, which means we (the veterans) are buying new stuff all the time, not just the new players that are just getting started out and need to get up to 2,000 or 2,500 points worth of stuff.

But back to the "rules" of the campaign: Don't take them so seriously. The scenarios they've provided are just a jumping off point from which to give folks a reason to play some games, and, yes, hopefully buy a new unit or two and get them built and painted up to use in the campaign. Keep in mind that these scenarios were written by the US Sales Team, and not veterans from the Design Team. If the US Team can sell the idea if doing things like this more often and regularly, and can sell the idea to GW Corporate, that will be the big "Win" for all of us, and that's the goal of this beta.

So don't take it too seriously (the scenarios & rules, I mean). It's not like any of this is going to find its way into fluff... Yet. I think if we can sell Corporate on the idea, then that MAY become a possibility, and wouldn't that be cool!

But in the meantime, remember that it's really just an excuse to get some friendly games in, meet new players, and maybe add that new unit you've been thinking about so you can try it out!