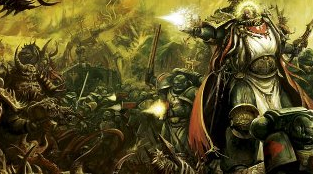 There is a Games Workshop Campaign called the Conquest of Kaiserslautern VI, going on currently in the US in a beta format. Now we have direct information from the campaign documents that can enlighten us as to what exactly is in this campaign, and what it is.

Lets take a look at what this campaign involves.

Warning: if you are in this campaign, there may be spoilers below, so proceed with caution, or stop here.

Conquest of Kaiserslautern VI
"On the remote imperial planet of Kaiserslautern VI in a distant sector the servants of the Dark Gods open a new chapter in their unending campaign to destroy the Imperium of Man. Having planted the seeds of rebellion among the populace for centuries, Chaos Lord Krannon the Relentless is now ready to reap the bitter harvest. There is still hope, however, for the citizens loyal to the Emperor. Company Master Balthasar and his Dark Angels stand ready to defend Kaiserslautern VI with their very lives, if necessary. The fate of the planet is now in your hands. It is time to choose sides and once again let slip the dogs of war."

The campaign is geared towards Dark Angels and Chaos Space Marines but you can swap out other armies into the mix.

Here are the missions
Models to participate: Dark Vengeance or equivalent for from a different army
Dark Ritual in Heilbronn
Chaos Lord Krannon orders a squad of raptors to gather the components for a dark ritual. Tactical squad Rapeal is sent in to stop the raptors.
Last Stand at Stelzenberg Square
Reinforcements are coming for the Dark Angels, but they are ambushed by an unending horde of Chaos Cultists.
Last Stand Part 2
The Dark Angels against overwhelming odds attempt to end the threat of the cultists by killing the recruiters.
Battle of Hochspeyer Heights
The final battle of the campaign, where Master Balthasar and the Dark Angels face down Chaos Lord Krannon.

There are some optional units that can join the campaign depending upon results, including the additional unit of a Land Speeder or a Daemon Prince for later missions.

There is a full list of Honors and Achievements for the campaign, which look to be designed to engage players to fully experience the hobby. You get some points for not only participating, but for the following actions as well.
-Playing a friendly game with a new player and teaching him something new
-Owning the proper codex, rulebook, tape measure, dice and templates.
-Bring a fully painted terrain piece or help the shop paint one
-Recruit a new person to participate in the campaign
-show off your honors in your display case on the inside cover
-play a game against everyone else that is participating
-write a short narative battle report for the stores facebook page
-complete a paint plan

You also get points for playing and painting your armies for the campaign.

Alternate units listed in the missions are as follows for each army
Blood Angels:
Sanguinary Guard
Death Company