3 Tyranid Dataslates Confirmed and Pre-Orders Up 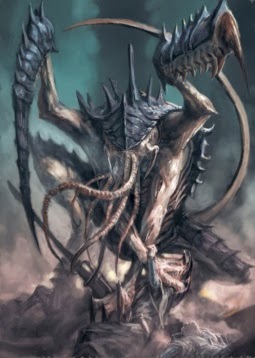 The first of three Tyranid Dataslates are now up for pre-orders, which follow the rumors we had earlier on them numbering them at 3. The first of these, Tyranid Vanguard will consist of both a new unit and a formation much like what we just saw with the Tyrannic War Veterans.


via Games Workshop
Leviathan Rising is the first book in a trilogy of Tyranid Dataslates, each of which details the different stages of Hive Fleet Leviathan’s assault upon the planet of Satys. This first installment showcases the vanguard organisms of the Tyranid fleet. It contains formations, missions and rules so that you can re-create the hideous invasion techniques of Hive Fleet Leviathan in your games of Warhammer 40,000.


Dataslate Tyranid Vanguard
In the previews, we can see just what the names of these are and what they consist of.
Unit
Broodlords Hunting Pack
Obviously Genestealers and a Broodlord

Here are some links to pre-order the Tyranid Vanguard Dataslate
Ebook $14.99
http://www.blacklibrary.com/games-workshop-digital-editions/Tyranid-Vanguard.html