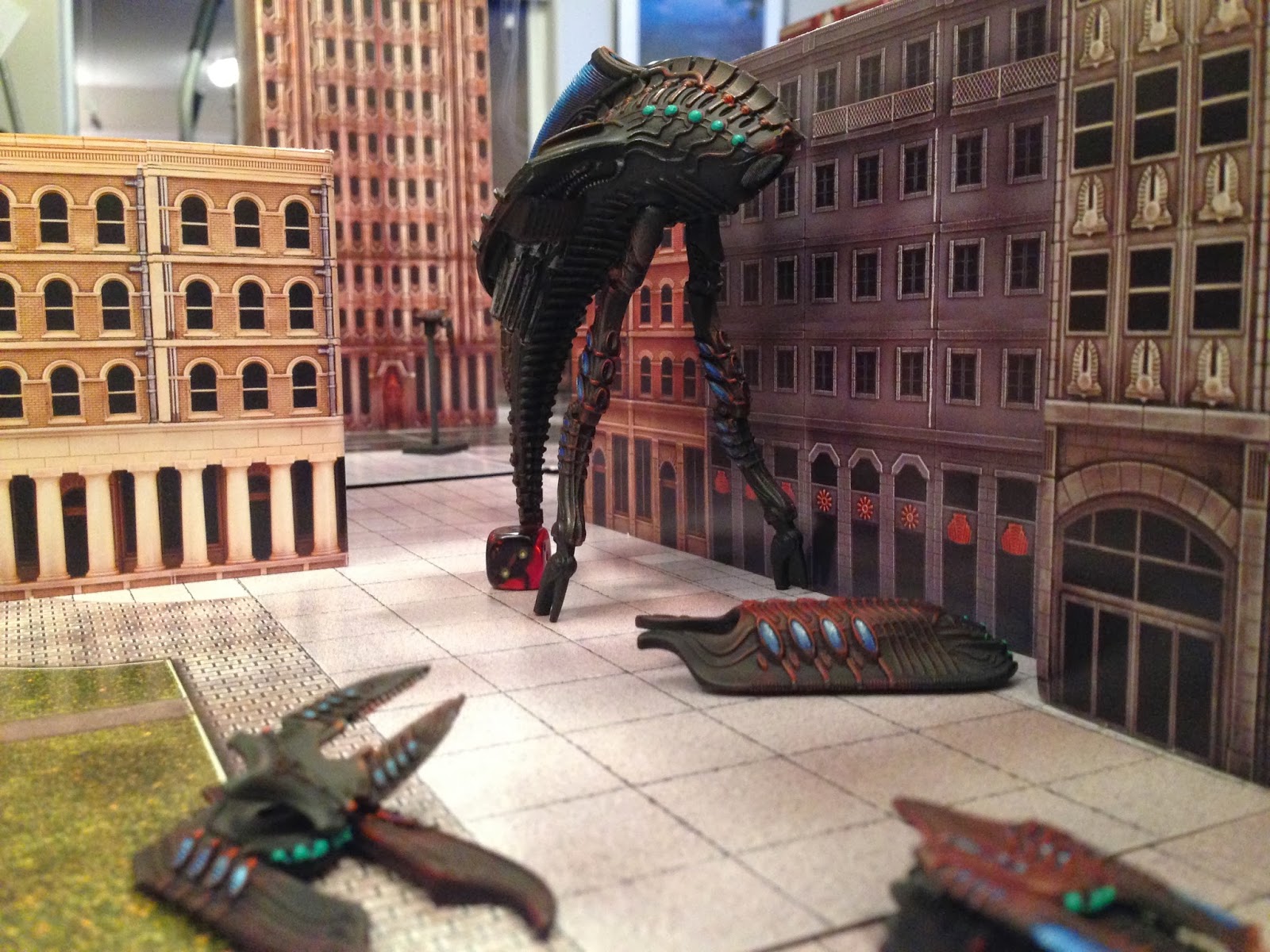 Late Saturday night into Sunday morning there was a massive Dropzone game going on here at the house. It was a 3000pts grudge match of my Scourge vs the PHR. The last time these two armies had faced each other it was a super close match that ended up within 40pts of each other with the victory going to the Scourge.

Here is what happened during the rematch. I was excited to get this game in, as this was the first game of Dropzone with my recently returned models from Blue Table Painting.


The mission we rolled up was Land Grab, which has 5 focal points on the board. With corner deployments, I had figured the Scourge's speed was going to give me a strong advantage in this mission. Relying up on my speed was going to be a series flaw in my plan.


Dropzone's mechanics are solidly simple, but the Tactics are rather complex, and to not realize that will cost games. Dropzone is a highly tactical game.

With the center focal point being in a high rise building in the center of the map, I was quick to enter a building near me, and link it up with a monorail to get myself into the center building early in round 2. Literally I was across the board, hitting the fastest of PHR units hard as they tried to push past their own board quarter towards a second objective. While I sacrificed a few units to do this, by round three and four I had crushed his forward movement, and pushed the PHR back into their corner. I felt like I was dominating the game at this point going into the fourth round of the game.

Unfortunately for me, that is where the PHR like to be, and excel at fighting this way. Their ranges are long, and even with my artillery set up in the center board, able to drop down upon enemy walkers at will, it was not enough to remove a castled up PHR force.

When I took refuge in a building to get some good angles down upon them with hard hitting infantry, the PHR simply took down the building. When he advanced, I jumped on him to push him back into his corner, while his type 2 walker firebase literally ripped me to shreds.

Now seeing that I controlled 3/4 of the board was a good thing, and that did not change throughout the game. However, my casualties were racking up. The one drawback I saw coming quickly, despite feeling like I was rocking the board, was that each focal point was a victory point. I controlled four of these, the fourth was in the center building which was only a single damage point from the entire building collapsing. So that was a lost point, which would leave me with 3 focal points.

Following the mission, that would leave me with 3 points, and him with him in his focal point in his deployment quarter. Focal points are worth 1 vp. Unfortunately if you have the most points controlling an objective, in this mission you gained an extra 2 VPs. That put us at a draw for victory points, and a tie is broken simply by adding up the points in you kill (kill points).

Any time he tried to advance, he was countered hard, and I learned the value of Razorworms in the battle. They are tough, and when following a torrent of acid spray to torch the infantry before the razorworms enter, the result is a lot of dead PHR. 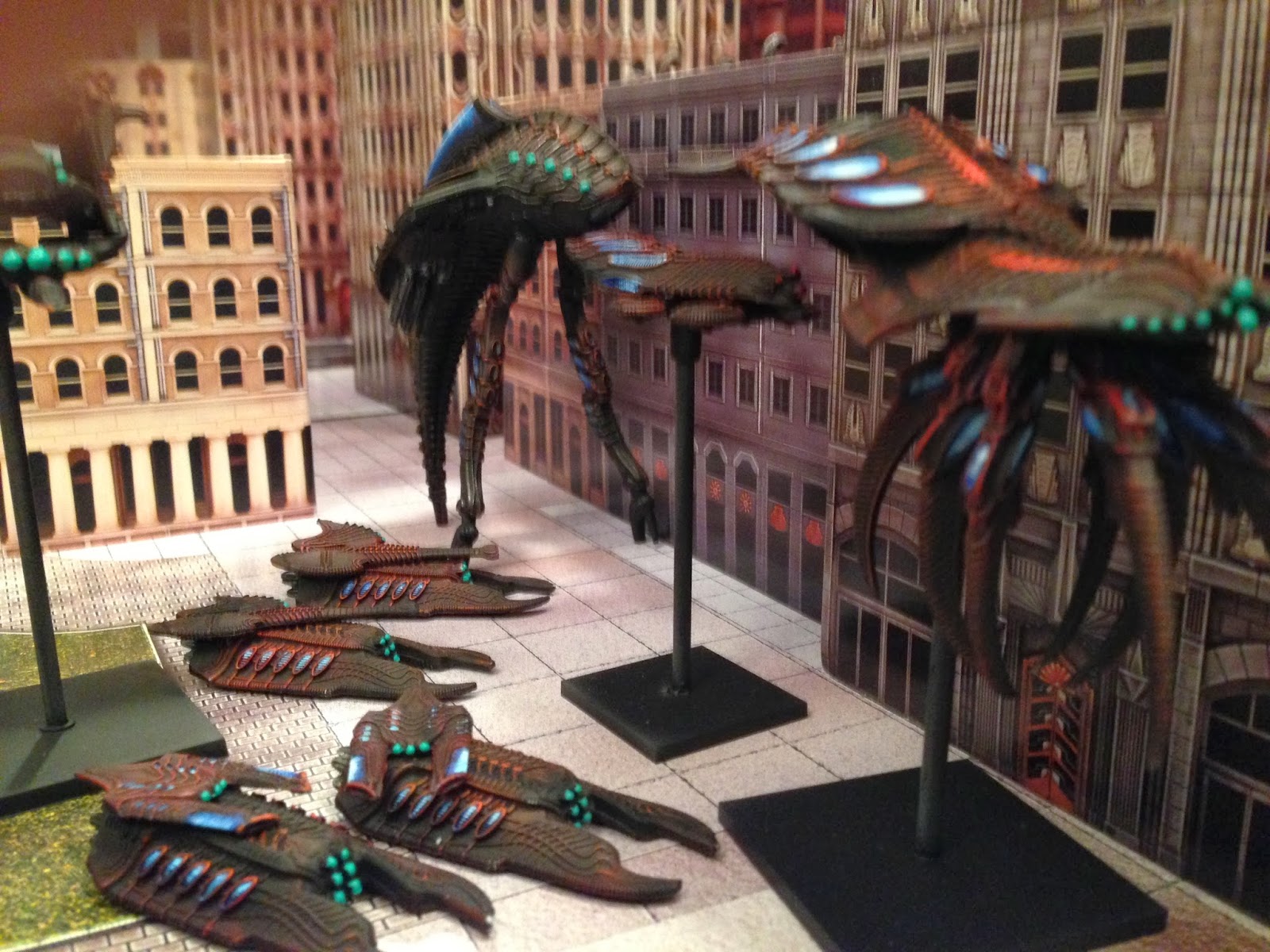 So I knew I could not pull more points to break the tie this point on the focal points, and I knew I was behind in battle points. Even with my speed, I was not able to get more points onto a single focal point either. In essence I was doomed to lose the tie breaker, which I did. In the end I lost something like 1040 to 1430 in kill points to break the tie. A solid but close victory for the PHR.

This mission was very interesting, in that my speed is literally killed my game. In the past with the scourge I have pushed the speed across the board to maximum efficiency, and in this game it was my downfall. There are times when even the scourge should hold up near a focal point, and then use the speed to react to any advance or forward movement the PHR make to gather new focal points.

In the end, I was very surprised just how tactical this game was. I was short sighted in getting where I wanted to go fast, ending up not being able to get what I needed to pull off the victory in the Tie breaker. The PHR excel at being able to whole up, and in an even match up the PHR will win that one. Its important when facing the PHR with the Scourge to use the PHR lack of speed against them.

The battle was a ton of fun, and in round 2 I was quick to throw my destroyers into a building right near his giant scorpion walker. If he had not gone first, it would of been destroyed immediately. As it was I was able to interupt his going first activation with a single unit and do 5 dps to the thing. My second Destroyer squad that did not get to act before the giant walker was airlifted to safety, was plenty to destroy the thing had I been able to utilize them.

There were lots of memorable moments in a game like this, which is great for the learning some of the more advanced tactics needed to master your army. For all you scourge players, take a minor commander for putting in your Desolator. It will hurt less when it gets shot up to pieces, and can still get into the front lines to do battle with less risk.