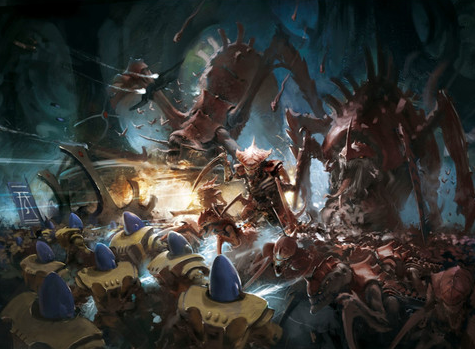 The first tournament results are in, and Tyranids are not the worst of the worst, and in fact are being reported as on par with other codices, namely Space Marines. The results come from the recent Tshift tournament in Seattle, from two different people on two different sites.


I read both of these sites, Blood of Kittens and Frontline Gaming, and I am not going to go into their analysis of Tyranids after this tournament. Instead I am going to post up the lists they shared and give you the links, so that you can see the success they had, and their opinions after hitting it hard up against a strong Tau/Eldar meta in Seattle.

So here are the two lists, and the links to the sites where you can read more about their reports.

The key here is not necessary their lists, but what they said about their games in the tournament. Tyranids are not going to be the bottom of the heap competitive army that so many people are fearing it is. Take a look at their reports.
1/21/2014
Natfka
40k, 6th Edition, Events, News Headlines, Tyranids, Warhammer 40k