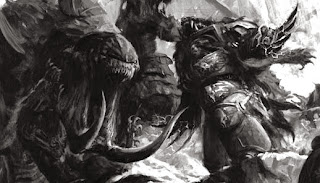 The changes are here, and already we are getting some of the details that include White Dwarf being confirmed to start having rules in them again. Alongside that a new way to release models every month, changes the monthly release schedules that we are used to, to a weekly release schedule that is laid out in this rumor set.


Although these are considered to be rumors right now, these are very solid, as this is happening. Later today I expect an announcement from Games Workshop regarding White Dwarf magazine and Warhammer Visions. After all the cat is already out of the bag.

via an anonymous source from the Faeit 212 inbox.
I just got off the phone with the GW rep for my store.

He informed me that the new weekly white dwarf would be here for sale on the 31st. The new weekly dwarf will have rules again (a big deal for my customers) will have a retail cost of $4 US, GW will buy back unsold issues so we can get a bunch and not worry about how many are going to sell.

The new release schedule will break up the model and codex release for each month with the codex being in the second week.

is how my rep put it.