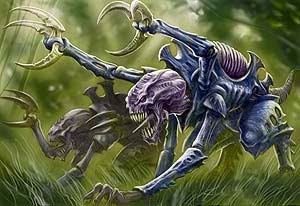 The new Tyranid Dataslate is upon us now, and its time to take a look at it. It holds 5 new formations, and these are not apocalypse only. That is a decent amount of content for the codex, as each special formation has its own special abilities to be used on the tabletop.

Since this is book 1 of Rising Leviathan, I can image that these Foc free formations can really add to the Tyranid codex without the use of allies. After all, with a large number of formations, you do gain some advantages over allied forces by not having to be limited to your Foc.

First off, I read through some of the background, and well, I was not as captivated as I have been in the past by the backstory in this book. Perhaps I am tired, so I will take another look at it tomorrow. Artwork wise, there are a couple pics that are cool, but they are not of Tyranids. The cover pic alone is severely lacking, so I was a little dissapointed in the artwork displayed in the dataslate.

The following formations really dig into setting up the Tyranids right into enemy lines, but I think too many of them rely upon terrain types. Here they are.

There are 5 new formations though, so lets take a look at them.
Lictor Forest Brood
1 Lictor Brood that contains 5 lictors into one unit and comes with a special ability "Deadly Fruit". Basically you get shrouded and if infiltrating into forest can set up within 6" of an enemy model.

Manufactorum Genestealers
5 Genestealer Broods that gain hit and run, and can a rule called unsuspected, allowing the formation to infiltrate into buildings or ruins within 6" of the enemy.

Broodlord's Hunting Pack
3 Genestealer Broods and one must include a Broodlord. Can infiltrate into ruins within 6" of the enemy, and units that are in reserve can set up in unoccupied buildings. The "Hunting Pack" rule means that all models in the formation have preferred enemy against a single unit.

Garygoyle Bio-Bombs
3 Spore Mine Clusters and 3 Gargoyle Broods that get the special ability Wings of Death. This allows spore mines to move 6" and does not half its run or assault rolls if they are within 6" of Gargoyles from this formation.

So there you have it. Definitely of use if you want to start your units far ahead, and get these extra units into the game on top of what you are already fielding. There is not clear "over the top" powerful formation here, but these will definitely have some use.