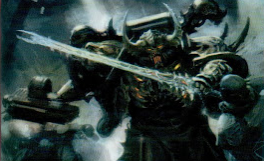 As information of new Chaos Marines has unfolded, word has come up that a new supplement will come alongside them. We dont have a name for it, but it has something to do with the Long War or Crusade, and will contain new rules for models with the Veteran of the Long War special rules.


This information comes from the same source giving us some insight into the new sprues for the two box sets we will be seeing; Chaos Space Marines/ Chosen and Havocs. Both of these box sets have some more details here as well.

via an anonymous source on Faeit 212
New Supplement
There is a supplement due for release.
The long war/long crusade
The name itself is a bit of an unknown to me but that's the general gist of it.

Contains fluff on what the legions have been doing for the last 10,000 years.

Rulewise any model with the veteran of the long war rule may purchase additional specialist skills represented by the universal rules. The skills vary in price with fear being one of the cheapest skills. Certain units may not take certain skills I.e havocs may not take fleet.

New Box Sets
I had a much more detailed look at the new kits today. The lord is armed with a bolt pistol and mace\maul\club thingy.

The plastic autocannon on the standard squad sprue is suitable long and dangerous looking. It has the option of being belt or box mag fed. One of the chaos torso is basically a giant mutated demonic face with a piece that glues in in between the torso and legs to represent a big ole mouth.

The chosen/ regular marine kit has 4 sprues. Two core marine sprues that build 5 complete marines each with either bolter of ccw and bolt pistol. It should be noted that not all ccw are chainblades. The arms are the new style wrist and hand on the gun. There's then the command/ chosen sprue which contains power, special, heavy and combi weapons. This sprue also includes torso and head options along with lots of add on pieces. The final sprue contains all your god bits and icons and is smaller than the other sprues