Tyranids: An Overview of What is Coming 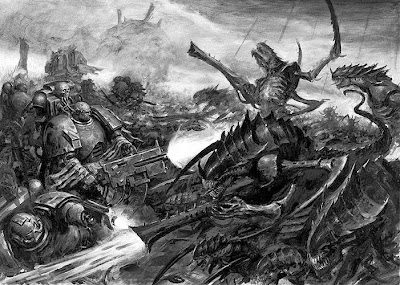 I went through and organized the prominent rumors and leaks of information into what should be considered very close to what is coming with the upcoming Tyranid codex. I am sure as we get closer that more information will come, but as it stands now, this is what we get.

Here are a couple forums that are allowed to keep leaked pics up
http://www.dakkadakka.com
http://www.lounge.belloflostsouls.net

Tyranids
Here is what is coming, and these are based off of information and rumors on this site, from 4chan, and Endobai on Warseer. I have found these sets are the most reliable, but should still be considered rumors, because there is still room for errors. Below are copy and pastes of the what has been revealed over the past couple weeks.

- 1 Carnifex that can be made into Old One Eye

Codex and Enhanced Codex
the codex comes with Warlord Traits, new bioartefacts, and new instinctive behavior charts.
the enhanced ipad version has its own Force Requisition and includes audio tracks that I am not sure the Space Marine codex had.

Apex Biomorphs
Apex Biomorphs, max one of each per detachment:
1. Synapse range is reduced but grants Eternal Warrior. Can be taken by any HQ (not Troop Tervigons or HS Trygon Primes).
2.Twin boneswords, AP2, for every wound inflicted on a 5+ the model regains a wound. For Primes and Tyrants. Regular boneswords are AP3 by the way.
3. Virus spore barrage (Ordnance, Poisoned 3+, unlimited range, one-shot, the template remains on the board until the end of the game).

A bit hazy but saw a flamer in there that could be taken by Tyrants and
Tervigons only (AP3?) and a 3+ carapace that grants a 2+ and EW if the
model didn't run/glide.

Tyranid Warriors and Tyranid Prime
Warrior kits come with 3 models, one of which can be upgraded to a Tyranid Prime. The Tryanid Prime parts include a new chestpiece, flared shoulders, and a new head. The box also comes with all the options you can take, meaning everything is included.

Lash whips, boneswords, sything talons, and rending claws to outfit all three models, with bioweaponry like spinefists, devourers, and deathspitters. One model per brood can take heavier weapons that are included in the kit, such as the barbed strangler and venom cannon.

The Haruspex is meant for up close and personal fighting, like tearing apart terminators, and comes with giant crushing claws and a talon able to reach out and ensnare victims.

The Exocrine is for ranged artillery with an intelligent Bio-Plasmic Cannon. Can launch multiple streams of plasma or a single large blast.

Tyrant Guard and Hive Guard
I know everyone saw the leaked images of the Hive Guard, and I want to confirm that it is a dual kit making either Hive Guard or Tyrant Guard. The other weapon in the leaked pictures besides the Impaler Cannons, is a Shock Cannon. The kit allows you to equip all three with either weapon.

As far as the Tyrant Guard are concerned, all options are included like most 6th edition boxes, from scything talons, crushing claws, lash whips and boneswords.

Again advanced orders are not coming until January 4th. Release date is the 11th.

The Harpy can be labelled as a bomber and comes with a stranglethorn cannon or heavy venom cannon, and can drop biological spore bombs (3 choices).

The Hive Crone is meant to take on air targets with its claws, and comes with drool cannon, that spits digestive acid onto its foes. On the bottom of the wings the Hive Crone comes with 4 tentaclides (missiles) that are used to take down aircraft.

Carnifex
Old One Eye in the report is regenerating like crazy
The new box makes two carnifexes with all the new options included.
Parts to make Old One Eye or your own beast or version of him are included

Rules
- Psychic Discipline: Dominion (Primaris), Psychic Scream, Warp Blast, Catalyst, Paroxysm, The Horror, Onslaught.
- Army-wide Move Through Cover.
- Hormagaunts are cheaper and have fleet, but are not beasts.
- Rippers are more expensive but are "no longer suicidal".
- Gargoyles still have Blind Venom, same function.
- Tyrants keep the twin devourers setup.
- Broodlords have a fixed (no rolling) psychic power.
- Tervigons and Hive Tyrants roll for random powers.
- Tervigons can still be taken as Troops with a brood of gaunts.
- New Instinctive Behaviours added. The effect is fixed per-unit, no rolling.

Psychic Powers
Primaris: Dominion, blessing, +6" synapse range for the caster
1. Catalyst - FnP for caster and unit, and another unit in 12"
2. Paroxysm
3. the Horror - Broodlord have this power
4. Onslaught
5. Psychic Scream - 1 charge, nova 6", each target takes 2d6+2 minus its Ld wounds without covers and armors
6. Warp Blast - 2charges, witchfire, unchanged


Questions and Answers from Endobai
Endobai responses are bold italics
1. Synapse gives eternal warrior
Not proven yet.
Seems a good deduction considering the price of the Warriors which remains more or less unchanged, but so far I have no solid confirmation.

2. Gargoyles are troops.
Cannot confirm that. FOC changes via HQs are possible, but right now just a speculation.

3. Trygons (primes), Carnifex, Hive Tyrant, Tyrannofex, Venomthropes have significant point decreases
True. Values are posted elsewhere, cannot tell if all are accurate, but in general there is a point decrease.

4. Zoanthropes come with Psychic Scream, and warp blast as standard
Nothing supporting this. I said some creatures are assigned specific powers and in this case it is a prime candidate, but right now I cannot say a definitive yes.

5. Brain leach devourers no longer strength 6
6. The Crone has a massive vector strike
Don't remember, but both are quite likely.

7. Tervigon, Warriors, gene stealers have significant price increases
Warriors and Genes stay the same, upgrades are either cheaper or more expensive, but the basic cost is identical.
Tervigon is more expensive, by about a nude Warrior cost.

8. No Doom, Parasite, Spore pod.
Cannot say for sure, but no confirmation they are and no traces of their presence I could find.

9. The big cannon bug has two different firing modes, one being a D3 Large Blast and one being multiple high strength, low AP shooting attacks.
Have no idea why it is supposedly D3. One concentated large blast with Ap2 and S7 or six lesser shots (six barrels).

BTW
Interesting bit. The gun is the brain of the creature, the grinning imbecile below is just the muscle useful to allow the brain to calculate all those things it likes and no doubt design subtle works of surreal art from the splattered remains of the enemy. Think Master-Blaster from 'Mad Max 3'.

10. Hungry eyes bug has the ability to magna grapple vehicles and enemy troops.
Nice, but pure speculation so far.


January Dataslates
two new dataslates coming alongside tyranids next month. you might find it interesting that they are called codex dataslates. not sure what that means.