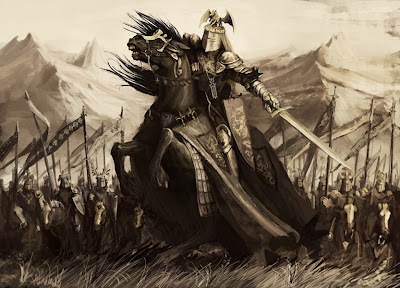 Bretonnia models have been reported missing, in fact quite a few. This was sent in earlier today and by the time I was able to check on the GW site, Grail Knights were available again. It doesnt change the fact though that this armies status remains in question. Is Bretonnia going to be absorbed into another army book like the Black Templar were in 40k?


Please remember that this is rumor and conjecture. Mostly just looking at what is happening to this army.

via a Reader here on Faeit 212
over the past few months, GW has been quietly taking down models within the Bretonnian Army. At time of writing, their entire Rare section is now empty - including the Finecast Grail Knights (other no longer avalible Models include Questing Knights and various flavours of Lord - again, some of these include Finecast models). In fact, the army can no longer be legally fielded by new players due to the absence of the Battle Standard Bearer model (which as any Bretonnian player would know, having a BSB is a compulsory part of the army).

To me, it looks like GW is cleaning house. It could very much be clear signs that either the Army is going to get an update soon, or get the Squat treatment.
12/20/2013
Natfka
Bretonnians, Rumors, Warhammer Fantasy