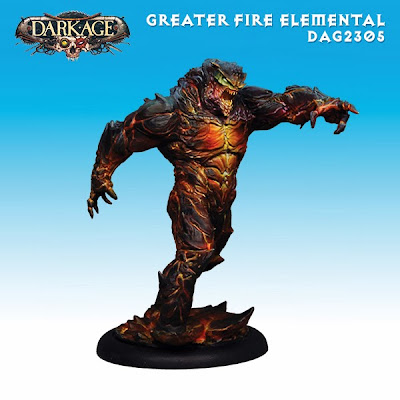 More than anything, the above image says it all. Dark Age Miniatures is once again releasing some must have models in my collection. The problem is that I can't play all the factions, but the Greater Fire Elemental is just plain awesome. Once Christmas is over in a few days, I will be looking at what Dark Age models I need to get back into the game more. 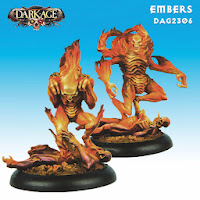 Stoke the fires fueled by hatred with the Fire Caste Embers! These lesser elementals, brought into the battlefield by the powerful psychogenic Foci of the Soul Wardens, serve to both fuel the fires of the Greater Fire Elemental as well as seek to burn and cinder any foes who should stand against them. Nothing is quite so demoralizing to the enemy troops than seeing the bodies of their slain comrades rise and take spark to form these monstrous creations- and just like any good fire, once one has sparked to life within it lies the ability to generate more, meaning that with each kill the cycle may begin anew! Add these to your blazing Fire Caste army now! 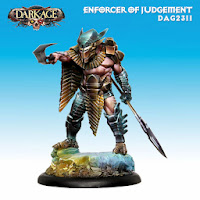 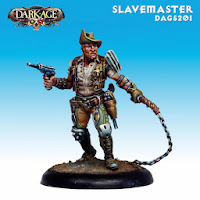 Only the most stalwart and powerful of the Dragyri Fire Caste's warriors and given the honor of becoming an Enforcer of Judgment. Suited with advanced technologies, such as the deadly shoulder-mounted Beam Cannon, this already terrifying Dragyri warrior is elevated to incredible heights of combat prowess. Want a juggernaut of rage and force to bolster out your existing Fire Caste army? You now have the option in the Enforcer of Judgment!

Here we have it, players, the first release of the Slavers of Chains Barrow! This is the first of the motley lot of Slavers available to your Outcast forces. With this powerful model you can unleash the might of Chains Barrow, granting unique debuffs to enemy forces as well as buffing your own. Par this deadly fighter with Wasteland Warriors and your own private army of Bounty Hunters to take advantage of his full battlefield tactics! 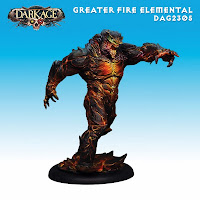 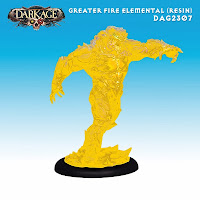 From the pits of hate and rage comes the Greater Fire Elemental, a being willed into existence by the undying fury of the Fire Caste Soul Wardens. This towering inferno destroys all in its path- burning all to ash, or worse, igniting the soul fire of its victims to spawn the deadly Embers. Just like a raging forest-fire, if the Greater Fire Elemental is allowed to run rampant and fuel itself through the deaths of the enemy it shall turn the entire battlefield into a smoldering heap- much to the delight of the attacking Fire Caste warriors. Get yours now, available in both standard resin as well as translucent clear yellow!