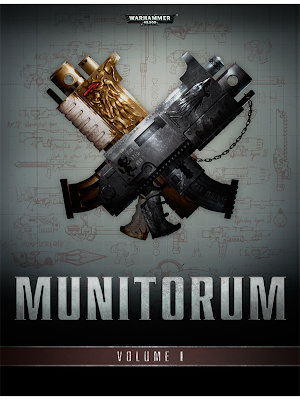 Games Workshop Digital today released Munitorum Vol 1, which is a digital release containing tons of weapons and wargear from single Munitorum releases, and combined into one volume. There are a total of 23 different entries and reaches a total print length of 105 pages or 372 digitally. That said, it seemed like a deal to check out.


An exciting feature of the release, is that most entries have sound to them. Ever wonder how GW imagines a jump pack powering up sounds like? There are lots of interesting sounds, including that of a Dark Eldar Shadowfield, to a plasma gun, even a plasma gun that gets hot.

So between the background and details of the entry, sound effects, I felt this digital release was worth checking out closer. Now is it necessary for the game? No. However, I find it a lot of fun to get into more lore and background of the wargear and weapons used in the game, not to mention hearing what the 41st millennium would sound like.

Some audio tracks are obviously better than others, and I think with the Volcano Cannon I was expecting a lot more. Most however are good, and enjoyable.

Now if you were to get each of these individually, they cost $1.99 each. This volume goes for $17.99, so unless you were only interested in certain munitorum releases, this is a good purchase.

Now something interesting and worth noting is in the Vortex Missile section. It has pictures of Deathstrike Missile Launchers. Now this is a part of the background, but it is interesting to contemplate that this could very easily be a single shot D-weapon launcher for the upcoming Imperial Guard codex in a few months.