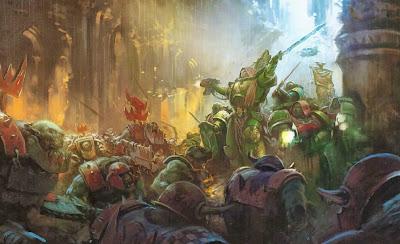 The idea of list tailoring is generally considered taboo, with the idea of a single list to take on all comers prevailing. Did you know that is not what is intended in Warhammer 40k? It takes a different line of thinking to move away from the "take on all comers" lists that our communities consider the backbone of how to play.


With a single list its interesting that this feeds the "ultra competitive" combo lists that dominate online discussions, and to consider "List Tailoring" as part of the game to some degree seems foreign and feels like cheating to some degree. However, if list tailoring to some degree was accepted, like bringing 3 different lists to your league, tournament, or pick up games, or even allowing some adjustments to your list, it would tone down how over powered some units are as people would have different lists to deal with different armies.

There has been quite a bit of behind the scenes conversations about various subjects. While I will get to more of them here on the site, I am pulling them apart some in order to focus on specific subjects so that these do not get lost.

I want to say thank you to the source here for sharing these thoughts and taking the time to talk about these subjects during the holidays. Realize that these are email conversations and that they might feel a bit broken up, as there are many things being discussed beyond what you see here. I have even included relevant sections by me, and they are in italics.

While these should be considered rumors due to the source, they also include opinions, so take them as such.

via a conversation with a must be kept anonymous source
Did you know that the Developers feel that opponents should exchange basic information before the game starts: including points value AND their codex?  Not necessarily their list, but they should say "I'm playing Space Marines" "okay I'm playing Dark Eldar" before making army lists.

They in fact feel that a degree of "list tailoring" is intended, where both opponents design an army that they think will fair well against the enemy Book.  Fluff wise this makes sense, as it's not like the Space Marines and the Dark Eldar are just randomly romping around a planet in combat formations and bump into each other.

Obviously in reality we don't do this for a number of reasons, first of which being money.  Not all of us can afford to have a huge collection of models that we pick and choose from to customize our lists toward specific races, and instead we want one "master list" that is a "take all comers" with a relatively high chance for success.  There in lies the problem though, because it forces people into these pigeon holed "perfect" lists of hyper-competitive combinations.

I think it was said really well by one of the blogs recently where he expressed that players attempt to emulate "Tournament play" in their pick up games, adopting the rules/missions from tournaments as well as any stigmas, such as 1 list only etc.

That is hard to do in a tournament or pick up enviroment, but it makes sense. This is something that I wish the developers would portray a little better and include it in any updates to the rulebook that are released. It would be a huge shock to much of the community. Even include it into the "to play a game" steps.  That would be cool, and I think the community would start doing that do some degree, if it was presented to them.

It is actually already in the steps. You and your opponent pick armies and points limit, then make army lists. It's in that order.

Generally I try to pre-make a list and play as many games as I can with it in a given period (until I'm bored of the list) and that "recreates" the tournament feel, but the actual order is to discuss armies first before making lists.  Even read the WD battle reports, they specifically say "I know I'm going against X codex, so I wanted a lot of heavy bolters" etc.

Compare it to say Starcraft, you know your opponent is X race, so you use Y build, then modify accordingly as the game dictates, but your opener will vary depending on opponent race.  Same kind of concept here.
12/31/2013
Natfka
40k, 6th Edition, News Headlines, Rumors, Warhammer 40k