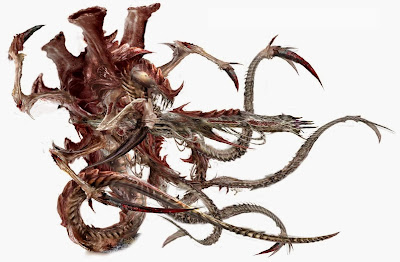 We had a decent sized set of Tyranid rumors yesterday that looked a little off from leaked images and information we have received so far about Tyranids. I am looking forward to getting something solid about this coming release, but for right now, we are going to take a closer look at yesterday's rumors and compare with what is known.


please remember that these are rumors. Endobai is a solid source on what is known right now about the Tyranids release. The rumors being checked are these ones found here from Tyran on Dakka Dakka.
http://natfka.blogspot.com/2013/12/tyranids-some-detailed-rumors.html


via Endobai on Warseer
I'll temporary leave my cave to comment on those.
personally I'd expect something accurate in the coming week i.e. something this pile of text is not.

Adrenals Glands give Furious Charge and the +3" run.
Opposes all what we know for example about Horms = disproven.
Unless there are different effects for monstrous creatures and such and different for little fellas,

Born in the Skies: Can't be grounded
No idea.

Hive Guard:
New gun is Spike Cannon, S7 ap4 2 shoots with Skyfire, enemy must reroll successful grounding tests
From the description of the weapon I doubt it can be skyfire. The weapon, but it doesn't mean that the unit will not be able to from its basic gun.

Lost Blinding Venom
No, still have it.

Hormagaunts:
5 points
Bounding Leap is charge after running
No it is not.
.
Swarmlord:
Mastery Level 3
Yep, what I said before.

Venomthropes;
30 points:
Nope. Add quite much to the cost - about the cost of a Marine.

I know nothing much above what we already know by this point, but clears some air.
12/27/2013
Natfka
40k, 6th Edition, Rumors, Tyranids, Warhammer 40k