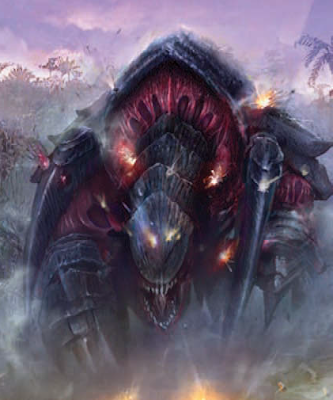 Tyrant Guard models from the January White Dwarf are in a leaked image shown on Dakka today, which originate from 4chan. Of course these leaks are showing some of the new options for Tyrant Guard that we were talking about last week, so lets take a look at what was said, and then you can go check out the pics.


Please remember that these are rumors until something official is released.

via an anonymous source on Faeit 212
http://natfka.blogspot.com/2013/12/tyranids-hive-guard-and-tyrand-guard.html
I know everyone saw the leaked images of the Hive Guard, and I want to confirm that it is a dual kit making either Hive Guard or Tyrant Guard. The other weapon in the leaked pictures besides the Impaler Cannons, is a Shock Cannon. The kit allows you to equip all three with either weapon.

As far as the Tyrant Guard are concerned, all options are included like most 6th edition boxes, from scything talons, crushing claws, lash whips and boneswords.

Again advanced orders are not coming until January 4th. Release date is the 11th.

I am going to link up dakka, since the ones on 4chan are unlikely to remain up long, and dakka likes to show these images.
http://www.dakkadakka.com/dakkaforum/posts/list/1290/567025.page
12/18/2013
Natfka
40k, 6th Edition, News Headlines, Rumors, Tyranids, Warhammer 40k