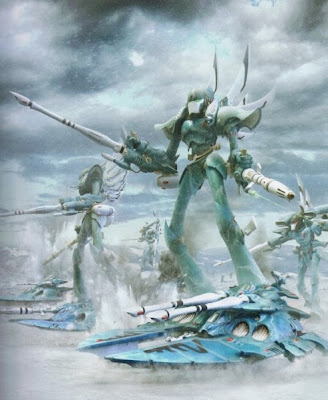 It cannot be beaten, even with armies designed to take it down. It's nigh unbeatable, a huge massive eldar titan with holo fields and a 36" movement. Its lances shoot an incredible total of 4 destroyer weapon shots and obliterates anything in its path.

Can it be on the table and the outcome of the battle not already pre-determined?


The Game is On Tomorrow Evening. I will be facing a Revenant Titan, and while I have lots of options, can a list be balanced, and still have the power to take down a Revenant? We are going to find out.

Its getting closer and still I have not finalized my army for the game. There are however some excellent options that I am considering, and would like to use. Last time we were discussing this, I simply told you what I had available to fight against this monstrosity. There was a lot of feedback, so here is where I am at.

All this could change before tomorrow when the Titan hits my lines, but for now, perhaps the community can give some feedback and input on what I should take against the Revenant Titan.

I do not know what else I will be facing alongside it, but I have scheduled the game with a player that is good with Taudar, and has the models to field the current meta lists. He also has a lot of Dark Eldar as well. So I fully expect Riptides and Farseers in this nasty force aligned up to table whatever I field.

I mostly have 5th edition armies to field. Eldar being the one that I have a full 8k in points of that is in the current edition. So this will be a difficult test to say the least. For a better understanding of my army options, take a look at the following article. http://natfka.blogspot.com/2013/12/the-revenant-titan-approaches.html

Here are some of the basics
This is what I have.
Imperial Guard
Tons of guardsmen and chimeras, Hydras, artillery, a couple of leman russ's and some misc. Two vendettas

Grey Knights
Loads of purifiers, Razorbacks, Inquisition plasma gunners, dreadnoughts, and a storm raven. there are also some misc.

Dark Eldar
Loads of them, anything but witches, which I only have a few squads of. Couple Venoms, lots of raiders and ravagers.

Eldar
Tons of infantry, aspect warriors, 4 serpents, 2 prism cannons and a couple falcons. I also have like 3 units of wraithguard and 5 wraith lords. Also lots of bikes.


This will be a regular standard game of 40k at 2,500pts. I am not going to take a D-Weapon or an Escalation unit. My thoughts are the following.

Imperial Guard
Imperial Guard with lots of S7 shots out of chimeras, alongside some vendettas, colossi for cover breaking artillery, and some allied forces to fill in the rest. Lots of heavy weapon shots is the goal here, and possibly even a blob squad to keep him away from lines.

Dark Eldar/ Eldar
A fully functioning and hard hitting ravager and raider force, with tons of infantry supported by eldar wave serpents with fire dragons and long range support. would of course come with venom and splinter cannon support.

Now if you are thinking that none of this can take down a Revenant, you may be right.
Lets hear some more thoughts going on this.