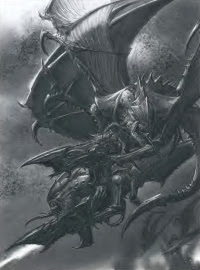 There are more leaks appearing every few hours, all of which appear to be from the January White Dwarf, which wont be released until January 4th, when advanced orders for Tyranids launches. So what is in this leak, well, it looks to be an overview page that also shows a troops section from the codex. The cover is also shown and more.


Tyranids are going to be a very important release for 40k, and although we have lots of information flowing, its really not enough for us to tell yet how this codex will turn out.

Please remember that these are still considered rumors, as nothing official has been announced or shown

So take a look at the these sites, that may still have them up.
http://40kwarzone.blogspot.com/
http://descansodelescriba.blogspot.com/
12/19/2013
Natfka
40k, 6th Edition, Rumors, Tyranids, Warhammer 40k