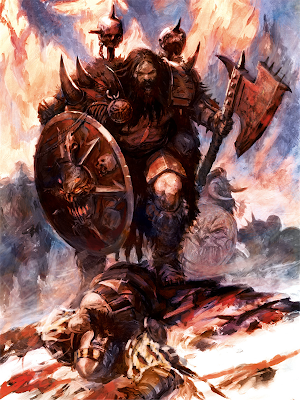 Warhammer Battle: Blood in the Snow is the latest Digital Release during the advent calendar for Games Workshop. It is a new scenario that pits the players into a deadly environment of ice shard blizzards and lightning murder storms.

I have always been a huge fan of the environment taking a larger part of games, and dislike the blank canvas stale boards that we often see at tournaments in the sake of fairness. For Fantasy players, this looks like a fun scenario.

Link to the Check Out this latest release for Warhammer Fantasy.
http://www.blacklibrary.com/games-workshop-digital-editions/Blood-in-the-snow.html

via Games Workshop Digital
Battles in winter are always brutal and bloody affairs, with both sides pitting their strength against the weather conditions as much as each other. For its part, the harsh winter climate is impartial in its chilling assault. As the snow is stained crimson with the blood of the slain, the hapless combatants are beset by iceshard blizzards and deadly lightning murderstorms.

Warhammer Battle: Blood in the Snow is a new scenario for Warhammer players that pits them not only against each other, but also against the hostile elements. Give it a try and add some seasonal mayhem to your Warhammer battles!
12/22/2013
Natfka
News Headlines, Warhammer Fantasy