Cypher Lord of the Fallen: A First Look 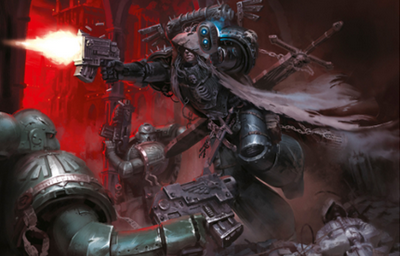 Cypher Lord of the Fallen has just been released digitally by Games Workshop Digital as the finale of the our December Advent calendar. There is more to this dataslate than we first thought, as it is the largest of any of the dataslates we have seen, comes with a tremendous amount of background, and allows you to play Cypher alone as part of your primary detachment, or as a formation leading the fallen into battle. 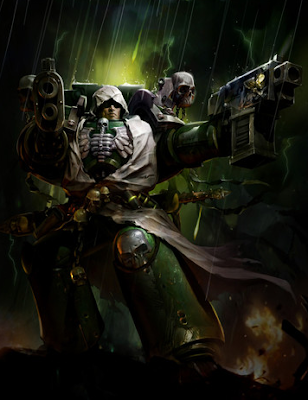 Lets start off by what is in this book, granted I have the interactive ipad version.
ebook version $16.99
http://www.blacklibrary.com/games-workshop-digital-editions/Cypher.html

Cypher
Cypher as a HQ unit can be used in a primary detachment of the following codices.
Adepta Sororitas, Blood Angels, Chaos Space Marines, Grey Knights, Imperial Guard, Inquisition, Space Marines, and Space Wolves. He does not take up a HQ slot and cannot be combined with any army of Dark Angels.

He gets to use his both his pistols to fire twice each per round, and can even use them in close combat. He comes with some nasty special rules, including but not limited to fleet, hit and run, infiltrate, and more. Not to mention his sword gives him shrounded.

He is quite the powerful character, and point cost wise, is not that bad. There is the issue of extra victory point conditions when Cypher is fielded across from Dark Angels, and a -1 leadership penalty to your Warlord if you take him. Otherwise I see him as having some very powerful abilities that should make him quite powerful, even with the drawbacks.

Fallen Champions
This is a Chaos Space Marine formation that includes Cypher and 1-3 units of Chosen. The chosen get Cypher which is strong enough on their own, but also receive Infiltrate, Fallen Leader (use Cyphers ldr within 12"), and Never Forgive special rules (giving any opposing dark angels zealot).

First Look
I really like this dataslate, as it comes with both a new character and a formation for the game. It also comes with a large variety of armies which both character and formation can easily fit into and have lots of fun doing so.

I was surprised at first when I saw the price of it just past midnight, but once I opened it up, there was more background story than I could sit down and read tonight. So yes, it looks like there is new background information, or at least the first time its all been in one place from what I know of.

I am rather happy with the results of this dataslate, and it is a great way to open up Christmas Day with. So Have if I dont get a chance to post up later, have a great Christmas.
12/25/2013
Natfka
40k, 6th Edition, News Headlines, Warhammer 40k