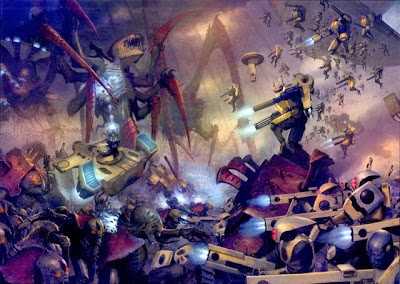 A new kit featuring two new tyranid monstrous creatures, the Haruspex and the Exocrine is going to be apart of the Tyranid releases in January, and right now very little is known about them. They both once had models that were armourcast, and I remember them fondly, so I look forward to seeing these hit the tables.


Please remember that these are rumors, and something official should be coming in the next few weeks.

via an anonymous source from the Faeit 212 inbox
The Exocrine and Haruspex are part of one dual kit set for January. Both are larger than a Carnifex but smaller than a Tyrannofex.

The Haruspex is meant for up close and personal fighting, like tearing apart terminators, and comes with giant crushing claws and a talon able to reach out and ensnare victims.

The Exocrine is for ranged artillery with an intelligent Bio-Plasmic Cannon. Can launch multiple streams of plasma or a single large blast.
12/13/2013
Natfka
40k, 6th Edition, Rumors, Tyranids, Warhammer 40k