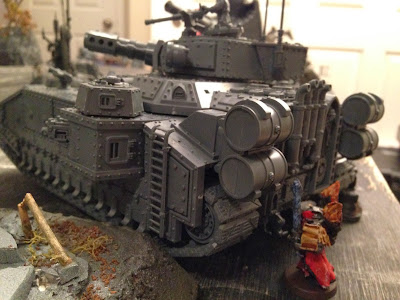 Last night there was a straight out of the books Escalation and Stronghold Assault game. My opponent was facing me down to with dual Mauler Fiends, Heldrakes and a Khorne Lord of Skulls, while I fielded the dreaded Hell Hammer with an Macro-Cannon Aquila Strongpoint and Void Shield Generators.


Of course how did we fit all this craziness into a game?, we were playing 2500pts. So here is a brief of the armies present. 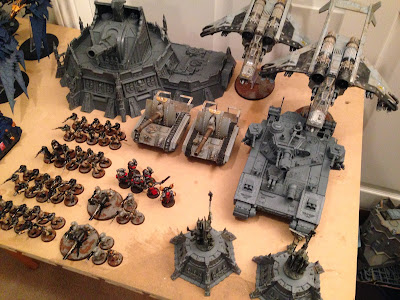 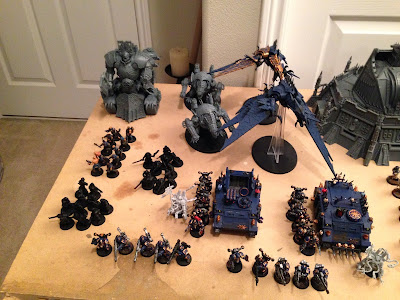 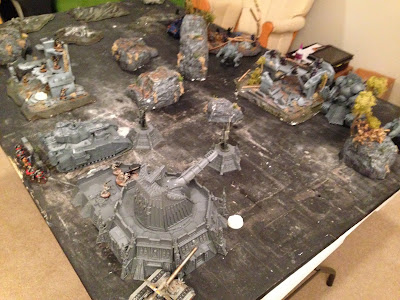 The Mission was Crusade with 5 objectives rolled, and Player Placement of Terrain used. We had rolled 3 pieces of terrain for all 6 board sections....... That was crazy. The terrain was crowded with minimal avenues something like a Hell Hammer to drive through.

Round 1, All Hell Breaks Lose
Imperial Guard had the first round, and of course Chaos Space Marines failed to seize. The opening round was about to be game defining and a little lucky. The first shots came from the Hell Hammer. Since it was night fight, I was happy the Hell Hammer came with Spotlights. I unloaded lascannon sponsons, and the Hell Hammer Gun into the Lord of Skulls, managing 2 Hull Points of damage, meanwhile Heavy Bolters and Heavy Stubbers poured fire into havoc squads.

The following shots were direct hits from the Macro Cannon. Two D hits directly on the Lord of Skulls. I rolled my 2+ and for my d3 roll came up with 2 6's. The Lord of Skulls exploded spectacularly. Misc other fire failed to kill much, but this was game defining. It should be noted that the Hell Hammer was well protected with a Librarian with Prescience and a Power field Generator behind the huge tank. (Later 2 Heldrakes would ruin this combo). 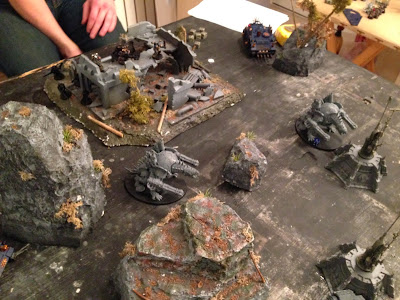 Bottom of Round 1. Chaos Attempts to gain some ground.
The Two Mauler Fiends now devoid of their Lord of War, charge in, and pull off an Assault upon one of the Void Shield Generators. In the future place these behind the and to the side of the Aquila Strongpoint. The shield generator was quickly destroyed. Also of note, all the void shields were taken down by Havoc fire, but no real damage was done to anything. 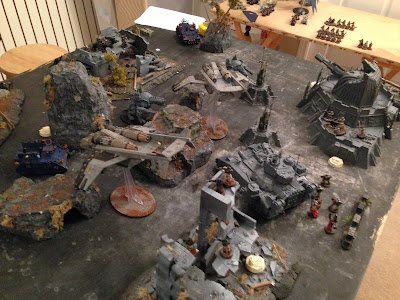 Round 2. Imperial Guard Takes Command of the Field
This was to be a dominating top of two. With the narrow paths of terrain, I flew two Vendettas in from reserves, one to completely block the path of a Mauler Fiend so that I did not have to deal with it, and the other to take on the rhinos with Warpsmiths/ CSMs in them. With that, both rhinos were destroyed, and when the Hell Hammer unleashed, one rhinos occupants were completely wiped out. The Macro Cannon completely obliterated one of the Maulerfiends. 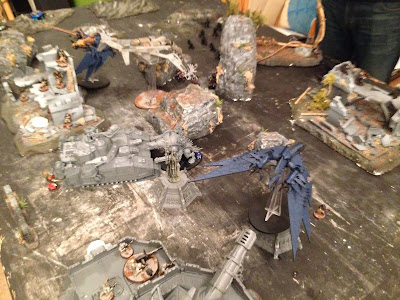 Bottom of Round 2. Chaos Space Marines Get Revenge
This came completely unexpected as the both Helldrakes came in, and one using vector strike was completely took down the blocking Vendetta. This was big trouble for the Imperial Guard, as now the Mauler Fiend moved 12 forward and into assault range of the Hell Hammer. Both Heldrakes used their baleflamers to hose down the Guardians of the Covenant Space Marines. All but the Librarian perished under the flame.

The Librarian surviving is what saved the Hell Hammers existence, as its power field generator saved it from the wrath of the Mauler Fiend. 5 Hull points in total were done as the Mauler Fiend used its daemon forge to tear into it.

One lone guardsmen with a melta gun survived the burning crash of the vendetta, all others on board were lost. The other Vendetta took damage as well, shaken with a lost lascannon. It would fly off the board during its next movement. 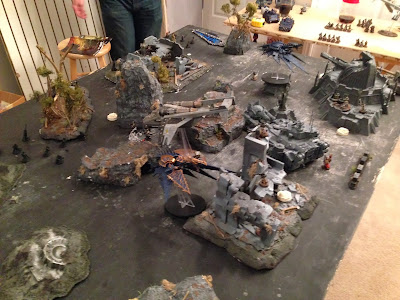 Round 3. Ground Threats Annihilated
The Imperial Guard fought back with a vengeance. Having thought the will of the Chaos Marines were done, the end of round two proved they were not to be taken lightly.

The Hell Hammer backed up in its tracks and turned on the Warlord Warpsmith with its Hell Hammer. Its Lascannons under the influence of the Librarian downed the far Heldrake, and did some damage to the Chaos Warlords body guard. All the Chaos Marines were killed, leaving the Warpsmith alone in the center of the field.

The Aquila Strong Point turned its guns on the remaining Mauler Fiend, and laid it to waste. 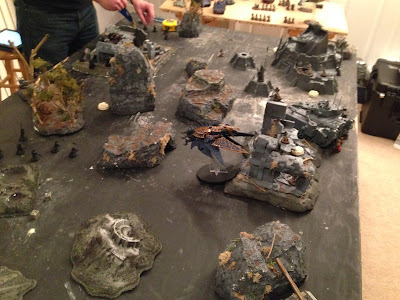 Bottom of Round 3. Broken Will.
The Guardians of the Covenant Librarian would fall to the Soul Blazing tokens from the dragons Baleflame.

With not much else around. the Heldrake tore up some guardsmen as it went to hover mode to stay on the field for a better flame attack. Meanwhile the void shields had regenerated and remaining autocannon fire and lascannon fire was unable to dent much.

The Warpsmith in a final strike, cursed the Hell Hammer, defiling it, and making the use of its weapons next round dangerous to use. 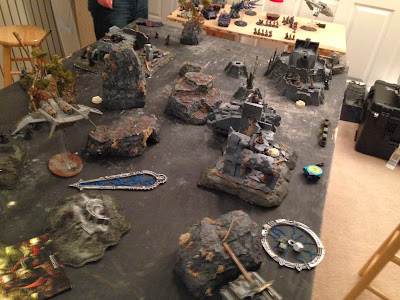 Round 4. Imperial Guard Seal the Victory
It was now that the Imperial Guard sealed the deal. Reserves brought in the last barely running Vendetta still full of troops. Two lascannons shot up remaining Havocs with Lascannons, Basilisks laid down barrages upon cultists, and the Macro-Cannon unleashed on a now hovering Heldrake. Alas the Chaos Marine Warlord, fell to the weight of a Hell Hammer Cannon, and cultists began to die.

With a clear victory in hand, and not much else to do, we called the game.


Game Two.
Game Two would be much much closer, and hinged on a single failed assault roll for the Khorne Lord of Skulls. Two failed rolls in fact, when a simple 6 was needed to reach the Aquila Strongpoint. The last game was very close, and most everything died on both sides of the table. The Hell Hammer was destroyed by Massed Melta fire, Vector Strikes and more.

Conclusions
Overall Dark Angels as an allied force to Imperial Guard is always a strong choice. Add in a Lord of War, and if they survive can be game altering. The Aquila strong point was a tough cookie. In the second game, it was hit hard and luckily survived a Mauler Fiend attack. (complete luck on my part that it survived).

Fielding both a Lord of War and big Fortifications costs a lot of points. This is not something I would suggest doing in a competitive scenario, as its nowhere near efficient. It was a lot of fun though, and I know that when the Chaos Space Marines took down my Hell Hammer in the second game, he felt a great sense of vindication.

We had Massive Fortifications, Void Shields, Two Lords of War on the Field, with double Focs, and lots of fun craziness. That Macro Cannon was tough, able to fire a Primary 2 D-Weapon and was devastating to whatever it fired at. (although in two rounds of game two it killed nothing except a single cultist).