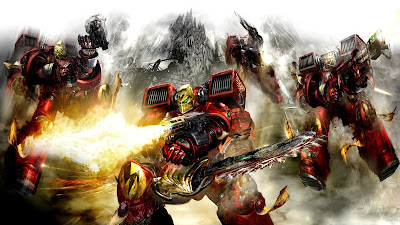 The Bell of Lost Souls put out a release order today, and for the most part it lines up with what we have been hearing. Until recently anyhow.


Now we know that both Space Wolves and Blood Angels were being worked on alongside the Space Marine codex and for a long time the release order below is what we were being told through rumors. Recently though we have been hearing something a little different, that instead of Space Wolves coming after Orks, Blood Angels would indeed be in their place.

So when you look at this list, realize its very likely that these two (Blood Angels and Space Wolves) may be swapped. Of course as 2014 progresses we will be getting some more detailed information.

via Larry Vela on Bols
40k Release Order
Here's the latest word we've heard on the next 12 months, in order of release:
On the Warhammer 40,000 side of things:
Five 40k books minimum, more if they can be fit in:
Tyranids
Imperial Guard
Orks
Space Wolves
Dark Eldar
------------------ the "if they can fit them in line"
Blood Angels
Necrons
Grey Knights

Warhammer Fantasy Rumors
Fantasy Release Order
Don't forget to have these Warhammer Fantasy titles interspersed in there throughout the year as well:
Dwarfs (Q1)
Wood Elves (Q2)
Brettonia (Q3-4)
Warhammer 9th Edition (coming in Summer) is the big maybe in 2014.  We have contradictory chatter out there, but more of it is still saying yes.
12/23/2013
Natfka
40k, 6th Edition, Rumors, Warhammer 40k, Warhammer Fantasy