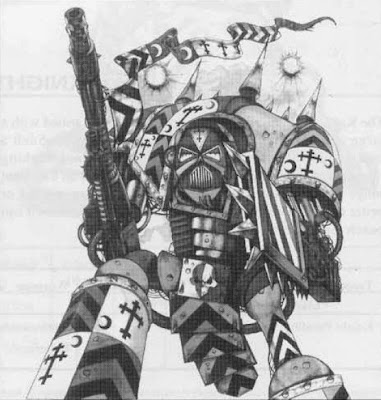 Escalation has become a nice source of information with all sorts of hints and clues in it as to what we might be seeing in the future. We first saw the the new tyranid model revealed in a picture there, and now, references to Imperial Knights.

The future release of Imperial Knights is currently speculation based on these sightings.

via Dave on Faeit 212
Has anyone else picked on the multiple mentions in Escalation of Imperial Knights?
p52, Space Marines " ...clear out threats to Imperial Knights"
P71, Eldar  "... during their inexplicable raids on forge worlds and Knight worlds..."


What Are Imperial Knights
via 40k wiki
http://warhammer40k.wikia.com/wiki/Knight
A Knight is a small combat walker of the Adeptus Mechanicus that is one-man version of a Titan and is smaller than even the smallest class of true Titan, the Warhound-class Scout Titan used by the Titan Legions. Knights normally deploy in squadrons comprised of several of these war machines. The most common type of a Knight is about nine metres tall, with its head serving as the cockpit. Knights are the smallest and weakest of Mechanicus walkers, but they still are formidable and fearsome machines, all armed with an array of weapons beyond the power of even the strongest of Space Marines to bear.
12/18/2013
Natfka
40k, 6th Edition, News Headlines, Rumors, Warhammer 40k