Cypher, Who and What is He? 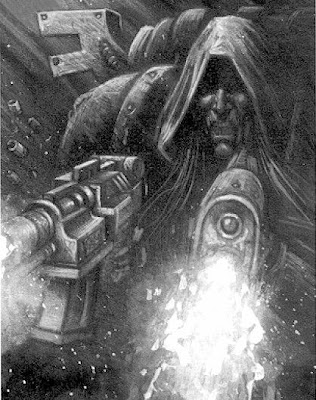 Cypher is a character that I remember seeing from time to time, and it was one of a good friend of mine's favorite character. Not that he was some hotshot special character that dominated the table, but because of who he was. His background intrigued his fans, not his rules.

So who is Cypher, and what is he?


We expect that on Christmas Day, Games Workshop Digital will release a dataslate for Cypher. Since its now Christmas Eve, its really time to dive into what and who, Lord Cypher is.

via Warhammer 40k Wiki
History
The terrible secret of the Dark Angels is that during the Horus Heresy some of their brethren fell to Chaos, corrupted by the Legion's second-in-command, Luther. The Traitors were defeated in a battle that destroyed the Dark Angels' homeworld, Caliban, but many of their number survived to be cast into the Warp and scattered through space and time by the Chaos Gods. The events of Luther's betrayal are known only to a select few amongst the Dark Angels and their Successor Chapters. The defeated survivors are known as the Fallen Angels or just the Fallen, mercilessly hunted down and made to repent by the Interrogator-Chaplains of the Dark Angels before they are executed.

The title of Lord Cypher before the Horus Heresy was a title of high office in The Order, the order of knights created on the feudal Death World of Caliban to fight the terrible Chaos-mutated beasts that roamed the planet's myriad deep forests. The bearer of the title was responsible for maintaining The Order's traditions, rituals and ceremonies, and was an influential adviser to the Order's leadership. Upon taking the title, the Lord Cypher gave up his birth name; it was also forbidden for any other member of The Order to use or even know it. The bearers bore a variety of arcane titles: Master of Mysteries, Keeper of the Truth, the Lord of the Keys, or else simply Lord Cypher. Above all else, it was the Lord Cypher's task to maintain The Order’s customs as a living tradition, rather than allowing them to degenerate into ossified relics.

Although Cypher does not appear in the records of the Dark Angels' past on Caliban, it seems implied that he is the last bearer of the title, and that therefore Cypher is not his birth name. This knight was even more of an enigma than most, not least because of his youth and lack of seniority within the brotherhood. When Lion El'Jonson became Grand Master of The Order it had been expected that he would name Master Remiel to the position of Lord Cypher; instead, he raised up a little-known knight younger than Luther or many other high-ranking peers. It was said that the new Cypher had been trained at one of The Order’s lesser fortresses, near the beast-haunted Northwilds, but even that was little more than rumour. No one could fathom Jonson’s decision, but no one had found cause to complain about it, either.

By all accounts, the new Cypher was more of a reclusive, scholarly figure than previous bearers of the title, spending long hours poring through the libraries and record vaults hidden within the main hold of The Order – though the paired pistols at his belt hinted that he was as capable a fighter as anyone else in the brotherhood. Master Remiel and Sar Daviel, two esteemed members of The Order, claimed that Cypher was formerly a member of the rival monastic order known as the Knights of Lupus. He was allowed to join The Order under an assumed name after the Knights of Lupus were defeated and their order eradicated by Lion El'Jonson at the end of The Order's war against the Great Beasts of Caliban.

In the present era of the 41st Millennium, the current Cypher is said to be one of the Fallen Angels. At the end of the Horus Heresy, Lion El'Jonson returned to Caliban to find Luther had turned to the Dark Gods of Chaos. El'Jonson landed and took up the fight against Luther while the Dark Angels' fleet bombarded the planet from above. Eventually, Luther defeated El'Jonson but when he did, he realised his terrible mistake and collapsed, unwilling to fight any more. The Chaos Gods realised their chosen had failed and sent a vast Warp Storm that sucked up the Fallen Dark Angels and spread them across time and space.

Cypher was one of these Fallen Angels, but no one actually knows his true name. He appears randomly throughout the galaxy, but is rumoured to be slowly moving on a course towards Terra. He is famous for his pistol abilities, being able to fire precisely with every shot, even when using two weapons, no matter the state of the battle around him. His characteristic combination of Bolt Pistol and Plasma Pistol are known throughout the galaxy as every Segmentum has rumours of Cypher-like figures appearing somewhere on their worlds. It is likely that Cypher has appeared in every Segmentum over time, although a good deal of the rumours of his appearance are probably other people wearing his iconic clothing.

Cypher continually draws the attention of the Dark Angels. He is believed responsible for many acts of instability across the Imperium, and is hunted by the Dark Angels with zeal even greater than that reserved for a "normal" Fallen. Even when he is captured, he soon vanishes, whisked away by his mysterious patron. Although his immediate presence heralds disorder and strife for the Imperium, it always emerges transcendent from it, stronger than before, which may suggest an intention behind Cypher's actions to make the Imperium stronger through struggle (following the old philosophy of "what doesn't kill you makes you stronger") which also accords with the philosophies of certain Radical Inquisitors.

Although the Dark Angels believe that they can only gain forgiveness for their actions by "redeeming" all of the Fallen Angels, others privy to the full tale believe that Cypher may have another answer. They believe that Cypher's seemingly random appearances across the galaxy conceal a path that is slowly leading towards Terra. They also point to the fact that Cypher carries a sword, yet he never draws it. This could be the famed Lion Sword of the Primarch Lion El'Jonson, broken in half and then lost during his final battle with the Arch-Traitor Luther on Caliban. One legend states that if Cypher manages to enter the presence of the Emperor of Mankind, the sword will repair itself and the Fallen Angels will be forgiven for their transgressions. Another theory states that it is actually the ebon blade known as the Sword of Luther, and Cypher wishes to use the sword to slay the dying Emperor's mortal body on the Golden Throne, thus completing the Star Child cycle or defeating the Imperium.
12/24/2013
Natfka
40k, 6th Edition, News Headlines, Warhammer 40k