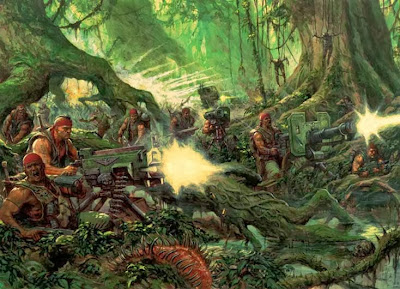 Late night after the Revenant Titan battle, there were three of us still hanging out and Kill Team seemed like the perfect game for three of us to hit the tables with. So yes, we played a free for all 3 player game of kill team. In fact, after the first, we quickly put together new lists, and got in a second game.


I want to say that playing kill team was ton of fun, quick and furious the games even with three people playing were effective. There was always the inbalance of getting ganged up on, which happened to me in the second game, but overall it was a fantastic game.

As far as the rules go, they are smooth and quick to play. Even when I am fielding lots of Dark Eldar Warriors on foot. Adapting the rules to 3 players were also easy, but 4 would be better when it came to balance.

In Kill Team you purchase your units, upgrades etc, and each model in the units you choose for your 200pt game act independently as their own unit. Ideas that seem rather tough to kill are units of snipers, Dark Eldar Splinter Cannons, and the surprise vehicles, like an Armoured Sentinel. Eldar Jetbikes also rock, as well as nurgle bikers.

Vehicles are allowed in the game, and can be devastating. The limitations to it are your armour value cannot be over 33 combined, Front +side+rear. Other restrictions include not models with a 2+ armour save, no flyers, and no models with more than 3 wounds. The detachment consists of 0-2 troops, 0-1 elites, and 0-1 fast attack.

The one issue I had with the game, is how easy it was to pick out the special weapons or specialists and target them. Meaning that if you had a good shot at them, they were most likely to die. So sniping your opponent is rather easy in Kill Team. This allows you to quickly kill the one or two guys on the opposing army that can can take down your vehicle or that have long range guns, to quickly gain an advantage.

So yes, Kill Team was a lot of fun. Something that would be interesting to see played more, and to see what people are fielding.

Here are a couple of my favorites ideas
A Dark Eldar Venom Weapon Specialists with split fire. Lots of warriors and or Trueborn
Eldar Jetbikes and/or Eldar Rangers.
Sergeant Harker with 3 flamers, an Autocannon and of course Harkers heavy bolter. Then add 5 Ratlings.