7th Edition: Currently As It Stands 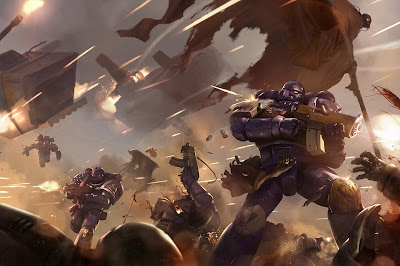 By now rumors of a new 40k edition have reached just about everyone. As it stands now, we have heard that 7th edition is coming sometime between July and September, and is currently under playtesting. The ideas behind the new edition, are to literally pull all the rules together, including Escalation and Stronghold Assualt, and to balance out some key areas of 6th edition.

Please lets construct the comments in a positive manner to discuss these possible rules, areas of contention, and how these can help us move forward to help impact the future of our game.

via an anonymous source on Faeit 212
So, here's the breakdown for areas of interest as they stand.

Interceptor is being unhooked from skyfire

Skyfire lets targets shoot at Flyers at full BS, but ground targets only as snapfire.

Interceptor lets you shoot enemy reserves at the end of the enemy's movement phase.

They will no longer interact and let a target hit both ground and flying units with full BS.

A new universal rule will be introduced to be combo'd with skyfire to represent co-axle weapons.

Interceptor being slightly re-arranged.  Units will need to Nominate that they will be intercepting during their own shooting phase, in order to be eligible to use the rule in the subsequent enemy turn.  If they then use interceptor, they will still be unable to shoot in their following shooting phase, but can nominate to intercept again.

Right now interceptor is seen by the team as being too strong, and a no-drawback decision.  i.e. you shoot with it, if your opponent brings in reserves you get free shooting.  If they don't bring on reserves you act normally next turn.

This flip will make it so that a tactical employment of interceptor (with a bit of gambling) will need to be employed.  Smart generals may manipulate reserve rolls to delay reserves while an opponent is set to intercept, getting away with not being shot and then not presenting targets or they may bring their units on wholesale after forcing an opponent to shoot at their already-present units for whatever reason, thus denying them the option to intercept.

This was an original thought for 6th, but was cut because it was seen as "too much to keep track of," but now with tokens and markers being so prevalent it should see its way back in.

Character models with pistols will be able to make one attack using their pistol in Close Combat instead of the usual +1 attack if they want (they may always just use it as +1).

This may be opened up to all models or just models that are actively taking advantage of gunslinger (making all their attacks use pistols), but right now it's seen as something that "slows the game down."

The new rules for fortifications will be in the big book (in so far as how building damage, occupation etc)

The new rules for lords of war will be in the big book (but may see changes to D weapons).

More rules are there for if only one player takes a LoW, representing either the player with it having to use such a devastating weapon because of a critically important mission, or that the LoW is the objective itself for the team without it (i.e. destroying a titan is the basis for some campaigns in the fluff, let alone missions).

Dataslates will be in the new book, but are going to be modified.  They will still be self contained, but will most likely occupy the ally slot, or if nothing else, lock your ally to being that book.

i.e. if you take a tau dataslate, you can only take tau as allies.

The big words on the board are still "Let people take what they want and play with what they want" but it's being counter balanced with making it fair, competitive and within reasonable limits of the fluff.

I know that the original intention of letting people pick up 1 HQ and a unit for a new army and adding it to an existing force for a fresh alternative / marketing incentive to start a new army has been received as a relative "failure" by the developers and the consensus is that allies feel mandatory in order to play competitively, even outside of the WAAC combos that exist.  So this is the biggest area of contention.

I apologize for removing the comments in their entirety, as there were some good thoughts and comments mixed in.

The reason they were removed is because the rumor above was not even discussed or mentioned, in most of the comments. I am assuming from the comments that no one read the rumor, and just saw a 7th edition title to the article, and went straight to the comment section to vent, or dismiss. In essence the comment section lost the topic.
12/28/2013
Natfka
40k, 6th Edition, Rumors, Warhammer 40k