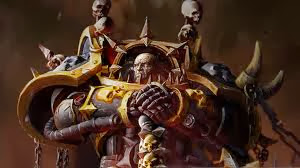 Games Workshop has apparently announced that any future Invasion Events have been cancelled. These were apparently inter-store tournaments that seem to have been thoroughly enjoyed by parts of the community.


Being from a location in the world were Games Workshop stores have just arrived locally, or are very far away, these events are rather new to me. Alas they are gone, before I really knew what they were.

via an anonymous source on Faeit 212
GW announced today that all future invasion events have been cancelled, and they will no longer carry out interstore tournaments. Sad day for the hobby centres :(

via another anonymous source on Faeit 212
Warhammer World is no longer running Invasion Events...
What was an Invasion Event? Simply put, it was small tournaments that would include a minimum of 2 stores, that would go to warhammer world for the day, and players would get 3 games each, to earn points for their respective store. Was a very friendly environment and always a good laugh with mates.

there have been a few questions about Invasions going forward so I thought it would be good to let you all know the following:

Games Workshop has chosen to cancel all Invasions and store trips to
Warhammer World. We've done this because we decided that they were not the
right thing for our customers or Games Workshop going forward, they are
impractical to run properly to give everyone the best possible experience.