Lord of the Fallen 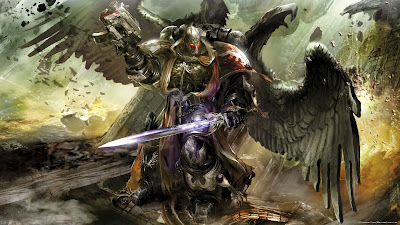 Forget an Inquisition detachment, there is a new man in town. Cypher is really one of the most phenomenal characters we have seen yet. He can be played by a large number of armies, his point cost is not that bad, and he gives you tons of special abilities that work well with your armies.


Lets look at why he will be so popular.

Primary Detachment.
The biggest and most important part of why Cypher is so strong, is that he can become part of a primary detachment for so many armies. This means he is part of the army, can be placed in transports, join squads, and can literally be combined with any unit from the codices he is listed for.

This puts Cypher into IG blob squads, plague marines, paladins, and many many more. Literally he is a character that can give you that edge in a huge variety of situations limited only by your a few armies and your imagination.

Also, he does not take up that HQ slot from the detachments Foc. So he is part of the detachment, but takes up nothing but points.

Stats
Cypher has the best stat lines in 40k. Initiative 8 with a WS7 and a BS10, he is a hard nut to crack. While he comes with no invul save, his sword does give him eternal warrior, so he will take quite a few hits (short of the D) before going down.

Special Abilities
Special abilities is where Cypher shines. He comes with the following powers.
And they shall know no fear
At any cost (extra victory point possibilities if Dark Angels are opposite him)
Blazing Weapons (can shoot twice with this pistols, or fire before or after a run move. overwatch at full bs) (assault half attacks are made at S4 ap5, other half at S7 ap2)
Divine protection (defines how is is captured for victory points if dark angels are opposite)
Fleet
Hit and Run
Independent character
Infiltrate
Never forgive (dark angel players opposite with inner circle rule gain zealot special rule)
Shadowy herald of strife (cannot be warlord, and ldrshp of current warlord is at -1)

Cypher also comes with his mysterious sword. This gives him eternal warrior and shrouded.

So he gives a unit a of transferable special abilities, like shrouded, infiltrate, hit and run, and they shall know no fear. These are a huge bonus for any unit he joins, and he can jump into a transport.

The Fallen
Cypher can be taken as a formation for Chaos Space Marines. The formation consists of 1-3 units of chosen, who gain the benefits of infiltrate, fallen leader (gain and they shall know no fear if within 12", and use Cypher's ldrshp), and Never forgive (see above).

So while Cypher can join many different armies, Chaos Space Marines get the most options with him.

My thoughts.
I see Cypher having lots of fun opportunities within my armies, and giving some of my favorite special abilities to the unit, like infiltrate and hit and run. His rules are unit changing, and combined with a radical Inquisitor, can make even the most tame unit something nasty to deal with. Of course IG blob squads always my first thoughts with such a character, but there are many more options than this that will make appearances of Cypher much more common than we have ever seen before.
12/26/2013
Natfka
40k, 6th Edition, News Headlines, Warhammer 40k