Dark Age: Getting in Games 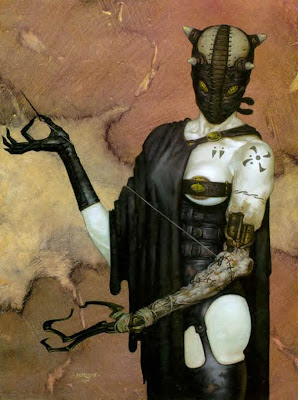 I hosted an evening of games with the author of the Prodigal Player, and was able to get in a couple games of Dark Age in. Now to be upfront, we were not playing the latest updated edition, which is something I need to get a hold of. I was also out of practice as its been a few months since I was able to get a game of it in.

To see the Prodigal Player's account of the game, definitely check out his site, where he gave a very well thought out review of his first thoughts on the game.
http://www.theprodigalplayer.com/2013/12/17/gaming-session-dark-age-with-natfka/

We were able to get in two games, of which I played the Skarred, and he had the Brood. This was a nice change up, because I am often the one playing the Brood, and its nice to get a chance to field my Abomination to see how he plays when he is not blowing me apart on the other side of things. 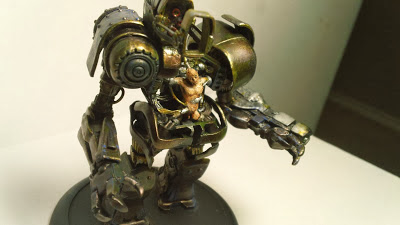 Of course on the other side of the models I have here for demo games, was the Brood's Howler. While I was able to make short work of him once, the second time around, he virtually ate or blew apart quite a bit of my army, with the aid of some Grists. 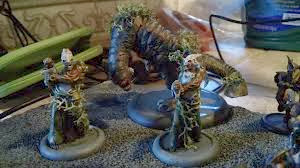 Dark Age is a fantastic skirmish game, that really doesn't get the credit it deserves. Its fast paced, quick, and extremely deadly once the action begins. Dark Age goes with the motto, "Everything Dies", and it truly fits this game.

What is Dark Age?
http://dark-age.com/index.php
Abandoned in the collapse of their star-spanning empire the humans of Samaria must battle for survival; against each other, the monsters they have created and the harsh planet itself. This is no place for weakness, only through courage and determination can a man hope to endure in the savage wasteland.

Dark Age is a gritty, D20 driven, post-apocalyptic skirmish miniatures game for your tabletop. The game contains rules that are easy to learn and get you into the action right away. You can tailor how you play your game by Activation Points and alternate activations. The game is illustrated by a number of top artists including the inimitable Brom; the world of Samaria is brought to life as never before.

I was really glad that I was able to get in some demo games of Dark Age, and it reminds me that its definitely a game that I need to get out more often. If you have not already, head on over to the Prodigal Player and check out what all action.
http://www.theprodigalplayer.com/2013/12/17/gaming-session-dark-age-with-natfka/
12/18/2013
Natfka
Dark Age