Is Taking a D-Weapon Your Best Choice? 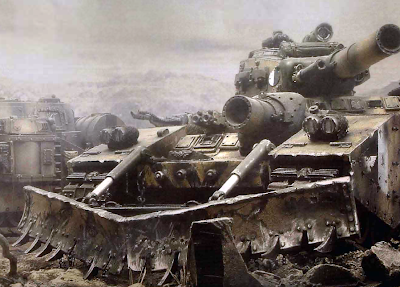 D-Weapons is short hand for Destroyer Weapons. They are terribly powerful and can wipe out the most proteted squad on the field. Re-rollable invul saves on your deathstar? The D- Weapon excels at removing these models from the table. Are D-Weapons the most powerful thing on the table?


No longer can you rely upon non fast moving deathstars (deathstars not able to take transports because of mixed allied units). Protect them or lose them. The best way of course is to transport up so that you can survive that first blast. Of course Void Shields, Deepstriking, and other means to move your deathstar should be taken into consideration.

Lets look at the Revenant Titan and Baneblade Variants.
Both of these can field D-Weapons, but should they? I definitely think someone should be fielding them, but by far I do not think that they are the most powerful weapon load outs either of these models can field.

The Revenant Titan comes with two Pulsars: 60" primary 2 Large Blast D-Weapons. The big thing is that they can replace these with Sonic Lances. These are where I see a Revenant Titan shining. Moving 36 and laying down some of the worst templates imaginable. Sonic Lances use the Hellstorm Template (its big), wounds on a 3+ and is AP2, plus you are S1 + 3d6 armour penetration. Its a primary weapon as well (I dont know how that will effect the dice for armour penetration, but assume each die is rolled twice).

With the size of that template, you can wipe out whole swaths of the enemy without remorse.

Baneblade Variants. The Shadowsword is the variant with a Volcano Cannon which is a 160" D weapon AP2. While the gun is definitely nice, I tend to find some of the other variants more appealing. The Hellhammer for one, with a Primary 1  S10 AP1 ignore cover massive blast gun. Not to mention that it has a demolisher cannon its hull, and can sport an array of lascannons and massed anti-infantry fire.

So while D-Weapons are making a big splash and creating huge waves among our hobby, the other variants are well worth taking a close look at.
12/15/2013
Natfka
40k, 6th Edition, Warhammer 40k