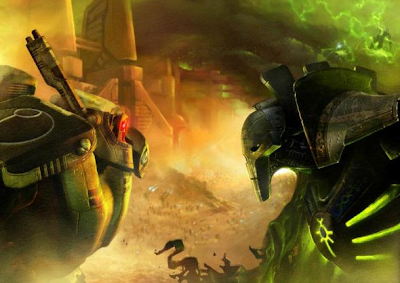 This is a guest author's Battle Report where Escalation was used that was sent in to the site for use. It highlights a Necron list using a super heavy against a hard hitting Taudar list. Im not going to give it away, so check it out.


I have been considering doing something along these lines for quite some time. So if you have a battle report that you are interested in sharing, and can follow the guidelines of writing it out like this one, I would be interested in possibly posting them up on the site.

thanks  to Balisong for sharing this report with us.


via Balisong from the Faeit 212 inbox.
Escalation Report 2k Points: Tau vs Necrons
I played a 2k point Escalation game tonight and I thought you might be interested in a report of it to see what people can expect from it.
Overall it was it was really, really close and the Lord of War actually turned out to be pretty balanced.

Mission was Big Guns Never Tire (3 objectives)
2 objectives were placed in my zone, and one in his.

My Warlord Trait was FNP within 3 inches of an Objective, and his was no scatter on Deep Strike.
Deployment was Dawn of War and he won the Initiative.

Round 1:
Tau: Tau advanced. The broadsides, and Riptides  lit the Tesseract Ark up with everything they had and… Whiffed… Either missed or failed to get through the AV 14. Right Crisis Suits Opened up on the Immortals killing 3 (They got back up due to Reanimation Protocols). Left Crisis Suits Killed 5 of the Warriors, 3 got back up. Eldar Jet Bikes Hid out in the backfield. Tau Danced Around a bit.

Necrons: Tesseract Ark Advanced and Flamed one of the Riptides with its D-Flamer (He’s Dead Jim!) earning me first Blood. It dropped the Pizza of Death on the Broadsides, Killing 2 and all the drones. The Pizza clipped the left Crisis Suit team, killing 2 drones. Warrior Blob Teleported next to the Eldar Bikers, and Rapid Fired, Killing 2 and putting 1 wound on Farseer. Immortals fired at the remaining Riptide, Killing a drone. Destroyers fired at the same riptide and did zilch.

Round 2:
Tau: Farsight Bomb dropped in and Popped the Tesseract Ark with a ton of Melta… The Explosion did nothing. Riptide fired on Devestators, Killing 2. Eldar Jet Bikes ran to the other side of the table, and the left Crisis Suits killed 3 warriors (2 got back up). Right Crisis Suits fired on Immortals and di nothing.

Necrons: Night Scythe came in, depositing Tesla Immortals in range of the Riptide, which double tapped it, doing nothing. Destroyers fired on Farsight Bomb killing 2 drones and 1 battlesuit. Night Scythe Fired on the Riptide doing nothing, but an Ark hi the Crisis Suits, killing a drone. Gauss Immortals fired on Right Crisis Suits killing a drone.

Round 3:
Tau: Riptide shot down the Night Scythe. Farsight Bomb wiped out the Destroyers. 1 Gauss Immortal and 2 Tesla Immortals Died.

Necrons: Warrior Blob teleported to right side of the table to chase the jetbikes, scattering into control of the Enemy objective. They Blasted the Bikes, leaving the farseer as the only survivor with 1 wound. A few more Crisis Suits and drones died. Gauss Immortals killed everyone but Farsight.

Round 4:
Tau: Riptide and Farsight joined the left side Crisis suit team and moved into range of the Gauss Immortals, Killing half of them, but they got back up. Nothing else much happened during the shooting phase. Riptide assaulted the Immortals, killing 3 (2 got back up) and taking 1 wound. Remained locked in combat.

Necrons: Warrior Blob Teleported to the objective they started on. They fired at the Farsight Unit, doing a few wounds to Farsight and the other Suits. Tesla Immortals Shot at the Non Farsight Crisis Suit Unit doing nothing.  The Riptide killed another Gauss Immortal but they remained locked in combat.

Round 5:
Tau: Right Side of the table and Broaside fired at Tesla Immortals Killing 1. Riptide killed another Immortal, Remaining Locked in combat. Farsight and his unit shot to death 3 Warriors and then assaulted through cover. Overlord Challenged and it was accepted by the Crisis Suit Character and quickly turned into Sashimi. Necrons and Tau exchanged blows, with Crisis Suits, and an equal amount of deaths was caused.


Conclusion
Overall I think it was a fair fight and to me at least it proved my theory that the Tau Codex was written specifically with Escalation in mind. It was an even fight, and while the the Tesseract Ark earned me First Blood, it did not pay for itself and gave my opponent 3 VP. So I came out on the losing end of the situation. At the same time it presented enough of a threat that my opponent had to concentrate on it for 2 turns, allowing my other Units to do what they were there to do.

Overall, I think that the newer codexes (Tau, Eldar, Space Marines) were written with Escalation in mind, and I can now see where they will work in that context. Anythign older, and I think you will have a rough time in Escalation though.

A Note abut D Weapons: They are powerful no doubt, but the sheer size of them means that you have to use them carefully.  To Combat them, Use mobility and position yourself to where the opponent has to worry about scatter, or can’t target you without targeting himself. Spread out, don’t sink too many points into one unit, and bring the mother down fast!
Best,
Balisong