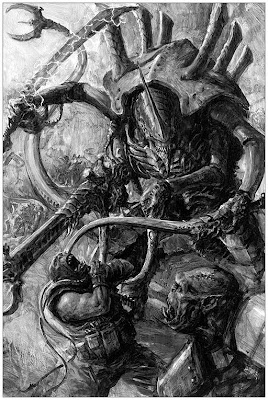 The Tyranid Limited Edition artwork has leaked into the forums and now throughout the internet, and while some people are still claiming these are not them, its time to get over themselves. These are the leaks, even though its with some existing artwork. I have had more than one reliable source confirm that these are them, and I have included a portion of that email in this rumor bit.


Please remember that these are rumors. Below is a link to the forum where I last saw the leaks.

via chunk on the Tyranid Hive
http://thetyranidhive.proboards.com/thread/44428/tyranid-rumours-dec-29?page=107
the new Limited Edition cover, end page, and dust jacket.
People have pointed out they're all recolours of existing artwork, so sprinkle some salt onto these pictures.

via an anonymous source from the Faeit 212 inbox
Extra Details on the Limited Edition Tyranid codex
The leaked artwork for the limited edition are real. They are Raymond Swanland's artwork
2,000 copies worldwide
the reverse inside is a full wrap around battle of Tyranids fighting Orks by artist Paul Dainton. The scene is epic as a full on Tyranid invasion full of Hive Crones and swarms as they overrun the Orks.
12/30/2013
Natfka
40k, 6th Edition, Rumors, Tyranids, Warhammer 40k