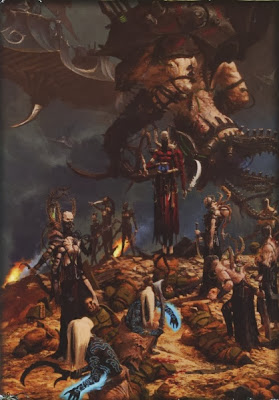 Long time readers here on Faeit 212, know that I am a huge Dark Eldar fan, and in fact the last release of Dark Eldar is what turned this site into its current form. So of course I pay attention to any Dark Eldar rumors, and in this case, forget to hit the publish button for just over a week. So here are some whispers of when we might be seeing Dark Eldar come for 6th edition.

via KiriONE from the Dark City Forums
Hey all, made an account because I recently started a DE army.  But that's also why I'm posting.

I was recently in a U.S. GW shop and while I was at the hobbying table I noticed a guy with a GW sweatshirt who wasn't one of the normal staffers there and we got talking.  Turns out he was from GW corporate, pretty cool dude, not what I would expect from a corporate guy.

Anyway, I was talking about how I started the DE army because I figured with the way the codices were being published (6 out this year + supplements) it seemed natural that DE would come out sometime in 2014.  He said that with WHFB 9th coming out, I shouldn't hold on out expecting DE in any part of 2014.  He said at best it would be the end of 2014.  This is obviously rumor but it was coming from a GW corporate guy, so that's good enough for me but then again who knows how high up this guy is.

With what we've seen with Tyranids (Dec rumors became January) I'd say January 2015 might be when that codex comes out.  January is supposedly a historically bad month for GW since everyone splurges around the holidays.