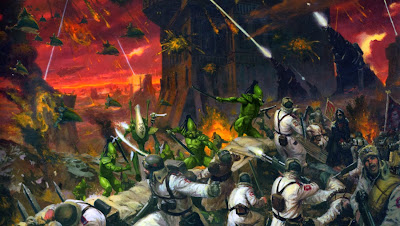 Valhalla Imperial Guard, specifically the Command Squad, are no longer available and have been discontinued. Its quite sad really, and I am going to imagine that once the final stock of troops are gone, they are going to follow suit. There are only 33 left in stock.

via a reader here on Faeit 212
I called the customer service line and spoke to a rep named         .They had 35 in stock of the normal squad. I ordered 2 boxes of them and asked about company command squad version and they said that they were discontinued due to low demand.

I know this is never happy news, especially after Christmas, but at least we know these guys are being discontinued. You might want to post this up so if anyone is feeling festive to give them a heads up.
12/27/2013
Natfka
40k, 6th Edition, Imperial Guard, News Headlines, Warhammer 40k