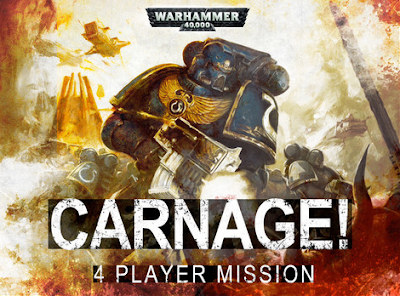 Just released from Games Workshop Digital is Carnage, a 4 player mission pitting up several players against each other, with makeshift alliances and deals, while you attempt to forge victory through a 4 player free-for-all.

Carnage is a mission and costs $1.99 to purchase. You can find it by following the link to Games Workshop Digital or on itunes. http://www.blacklibrary.com/games-workshop-digital-editions

The book itself has a 4 page short story to start it off, which I have not had a chance yet to read. The mission is about 4 ambitious commanders attempting to seize a precious artefact in the center of the board. A rather King of Hill type scenario, where even the final objective gives a random number of victory points.

The mission itself is rather straight forward, with most of the standard rules applying. The game is a Dawn Assault (uses night fighting in round 1), which will cut down on some of what could be overpowering firepower coming down hard on whoever gets stuck going last.

The game gives players rules for how to handle a 4 player game, and the suggestion of keeping the points below 1500. They appear rather clear, even in the handling of close combat.

Overall I think Carnage feels rather short, and possibly even cut short when reading through what it has to offer. I was left with the feeling that a second mission, or more special rules would of made the mission much more interesting.

I really like some of the planetary effects and tables that are found in the apocalypse book, and I think something along these lines would of thrown a lot more fun into Carnage.
12/17/2013
Natfka
40k, 6th Edition, News Headlines, Warhammer 40k