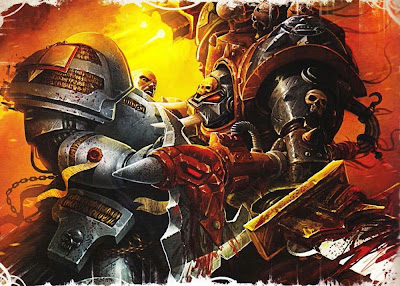 First off lets get this over with. There have been 3 rumor sets that I have received that are fabricated. I had posted them within the last 24 or so hours. I am not saying that the sender of the email is making them up, (he was using his real name in the emails/ probably by accident), but if it was not him, it was the guy giving him information. All three posts are marked in red.

Lucky for us, we have some friends somewhere that were able to help protect us from the trolls. So a huge thanks goes out to him/her for their concern that rumors not get out of hand and to help keep us on track. Please please do not dis on the source of the previous incorrect rumors in the comment section.

Here is a corrected rumor bit, and some real information to sit on, to get us back on track. Once again a huge thanks to the source of the rumor below for helping us get back to some juicy bits for the upcoming Chaos Space Marine codex.

2 butcher cannons, bs3, immune to shaken/stunned, can be locked velocity as normal.  Flyer only, no hover/skimmer mode.  Can vector strike at strength 10.  Strafing run.
Because this might be misinterpreted I'm going to be really clear: It does not have "two firing profiles." It has 2 butcher cannons, and that's it.  It does not have blasts of any kind.  It is "BS4" against ground targets because of strafing run (go read it, it's a USR for details).

Terminators can be upgraded to chosen, getting +1 WS (5) and +1 wound (2), and fearless. They can take marks on top of that.  It gets expensive.
- Interestingly enough, when upgraded they are troops if you take Abbadon, yet normal Terminators are Elites.
There are no "chaos storm shields,"
The best you can get is Mark of Tzeench to upgrade your 5+ invulnerable from Terminator armour to a 4+.

There is a piece of chaos wargear that gives a 4+ invulnerable, but it is not a storm shield it can just be added for characters. Yes it upgrades via mark of tzeench to 3+.  No it's not available for sorcerers.


Vindicator is unchanged, but can take daemonic possession (as all chaos vehicles can).  No melta of any kind  on it except the potential to buy a pintle-mounted combi-melta as an upgrade.

The new book has a lot to explore, and lots of fiddly options here and there.  The post about Abbadon and the previous one have no basis on the actual print what so ever.