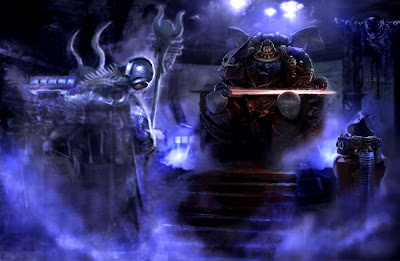 I have been getting a lots of emails regarding the release of the Chaos Space Marine codex. I want to be clear for the readers here. I am not a source of anything, rumors are sent to me, or found elsewhere, and I simply report them. This means that in general, and in this case, I do not know anything beyond what everyone here has read on the site.
All I have to go on, is what I have been told by sources and possibly some common sense. I will post up anything I am allowed to. So when I get the information, you bet I will be excited and will have the information up as I receive it.

I know everyone is glued to seeing the first verifiable release rumors for the Chaos Marines this week. So I thought I would share what I know and think about the upcoming release. Most of this is speculation, and just thinking out loud. The rest is what I have been told.

This post is mostly due to the large number of emails I have received. The primary bit of this, is you know as much as I do.

Conversations Behind the Scenes
There hasn't been any leaks yet. Of course I am looking and working to see if we will see anything this weekend or not. TBH I give a pre-release codex about a 50/50 this weekend. I dont expect the codex to be available until the 29th for pre-order and the 6th for a release date. However, there are some rumors pointing towards the 22nd pre-release. The 22nd is very logical to me, as there are several factors leading to it.

Number one, its works best if GW can release photos and battle reports in the White Dwarf for the upcoming model releases. I cannot see them having new models in the magazine that are not going to be up for pre-order right away.

Second, for a new White Dwarf makeover, they want to make a big splash. A new codex with new units in in-depth battle reports seems like the best way to do this with pics of the dragon and other new units. Not to mention that the chaos codex will be on display at Games Day UK on the 23rd (according to multiple sources). It would be very odd if the codex was not available for pre-order.

Either way sources have been rather quiet regarding the release dates. All I have to go on is what I was told before, and that 29th is the date for pre-orders, and 6th for codex release alongside the first wave of models. There was some confusion, probably on my part, that they might end up doing a 3 wave release. This was all a couple weeks ago, so I think decisions on how to release the codex and models has been made, but they are keeping it a surprise.

So what does all that mean? I don't know either.
The facts are.......
White Revamping release on the 22nd. Chaos Marines are in the magazine throughout.
A rumor has placed pre-orders on the 22nd for the next release.
Game Day UK is on the 23rd, and multiple good sources claim.... the codex will be there.
reliable sources 2 weeks ago claimed that the 29th is pre-order, and the 6th is release date. all new models will be released before the 20th.

I expect a teaser trailer or three. No rumors on that, just speculation.