Presence of Faeit: Tyranids, Dark Eldar, and the Direction of GW 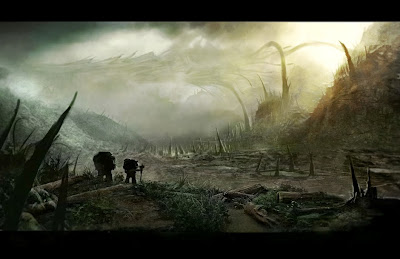 This week was a busy one for myself, and most of it was non-40k related. I was stuck in a 3 day criminal trial right up until the end of the week. Paperwork trying to purchase a new house, was coming through and there were a ton of legal documents that I had to read through. (of course I found errors and am having to work through these.)  However, there were a few things that happened this week.

Games Workshop's Direction with 6th edition
There is a lot going on in the world of GW, and its seems new improvements are coming at a very fast rate of change. Everything from White Dwarf (which is next), unit upgrade sprues, a Great new ruleset (6th), Digital products, phone apps, extremely fast FAQ's and much much more.

I love most of it, and of course there are a few things I would like to see, and have not. For instance, I think widening the platforms digital products are available in would be a huge step. I will claim ignorance though when it comes down to really knowing how these things are done, but a wider audience is one thing I would love to see. (I do think its coming.... I think we are mostly just an impatient hobby and want it all).

The next thing I would like to see, are more options to combat air. I know these are coming. I really do. However it makes it hard for some armies to compete, which brings me to my next subject..... tyranids.

Tyranids
I was doing some thinking late night the other day after a Dark Eldar vs Dark Eldar match up I had this week. The subject came around about tyranids. They really are having a hard time at the moment without being able to ally up. Then you have that tournament organizers have really put the crushing blow to the codex, by not allowing double FOC's.

This would be a nice step in doing a couple things for the hobby that I think should happen. #1, help tyranids open up their codex so that we might actually see them at a tournament or local gaming store, and #2 break the ice with double focs that the long time hobbyist are having a hard time with.

6th edition changed the way rapid fire weapons work, and really brought out the best in this type of unit. 20 warriors with dual splinter cannons and a Haemonculi behind an aegis defense line, rule the world of anti-infantry. Outside of 12 you are looking at 30 poisoned splinter weapon shots, and within 12 its a maximim of 48 shots. (I have never yet gotten all 48 shots off, the most is somewhere around 42 but averages are normally just over 30 per round.)

Once these units become fearless (which is very quick in a MSU enviroment) they are rock solid and fight down to the end.

3-4 units of 20 kabalite warriors are extremely dangerous on the battlefield. The fact that there are normally archons mixed into them, make the units stronger and more defensible against incoming assault units.

Somethings to remember..... keep the Haemonculus near the back so that they have the ability to leave the squad (they do not have fleet). I normally have them join up with a 5 man warrior squad that is manning the Icarus lascannons, but they leave the pain token with the larger unit.

One more thing........ Icarus lascannons.... nothing like a 96" ranged lascannon that can see in the dark for those games where night fighting is a reality.

Dark Vengeance
I am working.... although not very hard on getting these models up and ready. Meaning painted and based. For some reason getting them all done (at least one set of them) is something I want to do, and has pushed my terrain building projects back a little.

So basically my Guardians of the Covenant are being worked on as we speak. I am hoping that I can get them done in a quick 2 week time period.

Next Week
I expect next week to be one hell of a week. We are heading into the 3rd week of the month, and it will be a fun one. The new White Dwarf is coming out, and I am hoping we will get to see pictures of new releases for the Chaos Marine codex in them. The questions about what and when things are coming is hopefully what we will be seeing a lot of this week.

The first 6th edition codex is right around the corner, and I am practically dying to see it.

Chaos Space Marines
As a long time fan of Chaos Space Marines, the one unit that I absolutely need to see are the veterans. Of course these are now considered to be Chosen (3rd ed they were called veterans). They have always had the best weapon load out options, infiltration (which I think may be gone now), and some of the best stat lines of the codex.

We have heard rumors of chosen terminators as well. Whether this is a unit upgrade, or is a separate entry all together we don't yet know. The rumors also point to abbadon making chosen into troops..... something I was able to do with my Night Lords back in 3rd edition, and look forward to seeing how that works out.

Beyond Chosen, the dragon is my next favorite upcoming unit. The rumors have it being a death in the extreme to flyers, and having some good Air to ground attacks. Its point cost does not look like its over-costed either. Its rumored to have one or two guns (no matter what they are called butcher cannons or Hades Autocannons) I am wondering with rumors of them having two guns, and conflicting rumors of them having one gun, if the possibly the second is an upgrade for additional points?

Beyond this, the first 6th edition codex should really give us some insight to what we will be seeing in the future. A hard back (rumored) full color codex is something I want to see. How big is it going to be? How much background is in there? All these things I am dying to know.