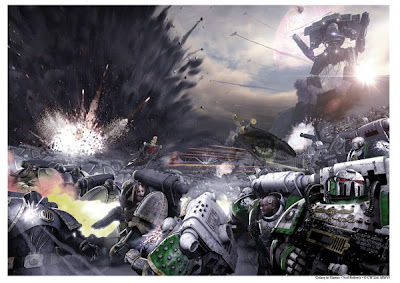 Here are some more details from the Horus Heresy book 'Betrayal'. This book is extremely detailed and looks like a great book. Here we get to see some of the more basic rules and how they will play out.

Master of the Legion
- only one per 1000 point
- can take a command squad as part of the same selection on the FOC
- if a unit is the warlord, they gain master of the legion
- can roll twice on one warlord trait chart (rerolling doubles) and select which one to use
- have the option of using one of the Rites of War (recommended for experienced players though)

Rites of War
- alter some options and limiting others
- only affect Primary Detachment
- Allies can have rites of war too but do so independently of primary detachment (same/different/none)
- eg, orbital assault: units that can take rhinos can instead take drop pods as dedicated transports, Dreadnoughts can take dedicated drop pods, Contemptors can take dreadclaw drop pods, terminator armoured units may deepstrike, may not take ANY units that can't gain access to drop pods or deep strike rule, no fortifications

There is a Legion Specific Warlord Trait table but you can of course use the main rulebook ones.
1. Warlord and all Legiones Astartes cause Fear
2. After both forces are deployed but before turn order is decided, may redeploy one unit. Included option to put a unit into reserve or take one out
3. D3 units in primary force may have shred rules added to any blast or template weapons they use
4. Warlord is fearless, plus warlord and any unit of Legiones Astartes within 6" add +1 to wound score when calculating if they win combat in an assault
5. Warlord gains Adamantium Will and one nominated infantry unit gains Deep Strike
6. Warlord and any Legiones Astartes they join may reroll failed rolls of 1 to wound, close combat only

One of the HQ options, called a Legion Centurion, can be upgraded to a specific role for additional points such as chaplain for 35 points to gain Crozius Arcanum wargear and zealot special rule. There are plenty of options here though, like Primus Medicae. Lots of wargear upgrade options. Some roles will limit which wargear can be taken while others give more options, like Forge Lord may also take any techmarine options for the same cost.
Above a Centurion is a Praetor. Again, lots of wargear options. Role changing unique to Centurion though.

Honestly, this book has so much depth I'm making notes to remember everything when making army lists.