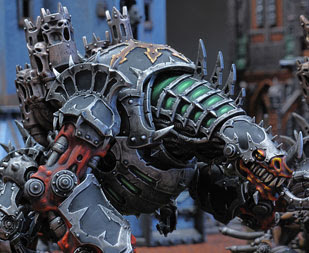 We are one week away from a Chaos Space Marine codex release, and there are quite a few new models we will be seeing in short order. Two in particular are the subject of this post, so lets take a closer look at the Forgefiend/ Maulerfiend and the Warp Smith


These models and codex are of course to be released on October 6th. So get your pre-orders in. I just got mine in yesterday.

via White Dwarf Daily
Behold the Maulerfiend. There is a strong bio-mechanical theme running through the new Chaos Space Marine range and the Maulerfiend is no exception. This Warp-spawned creation has armour plates merged with tortured skin; exhaust stacks sprout from it's iron-clad flanks and cables and pipes fuse seamlessly with daemonic flesh.

As the masters of the Soul Forges, the Warpsmiths are responsible for some of the most powerful war machines in the Chaos Space Marine army and the key to a whole new world of Chaos that, until this time, has not been explored - the Daemon Engines.