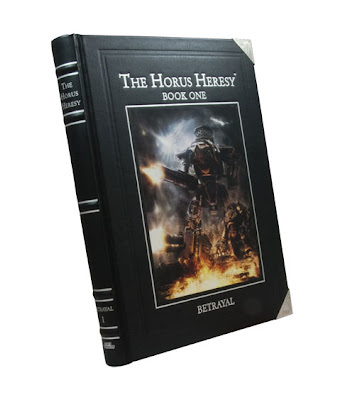 More and more information is flowing about what is in the new Horus Heresy book 'Betrayal'. This set contains information regarding Allies in the Age of Darkness, force organization information, and a new foc slot called the Gods of War. This set is definitely worth the time spent to check it out.


From a Hobbyist with the book (did not want name mentioned)
Eagle-eyed readers of the new white dwarf may have noticed on page 149 Paul Rudge has a loyalist heresy era death guard army. One of the last comments refers to a Contemptor Talon, a squadron of Contemptors. I can confirm the rules allow a unit of Contemptors 1-3 as well as regular dreadnoughts (1-3 separate unit). Apothecaries (each must be attached permanently to a separate viable unit) and Techmarines can also be taken as one unit of 1-3. All of those are elite choices. Iron Warriors fans rejoice because each techmarine acts independently and can EACH take a squad of servitors basically (no independent character status)

Force organisation chart is recommended to 1500-3000 point games and allows 4 elite choices to squeeze the goodies in. No slots have been shortened but HQ allows 3.

There are some Mechanicum rules in the book and the rough guide of Primarch restrictions is 2000 point minimum game but may not be more than one (unless apocalypse) and a Primarch may not be more than a quarter of the points of your army. That quarter (or fourth, sorry English here :P) is also for new super heavies and titans as they take up a special slot called gods of war. Most expensive Primarch so far is Horus, 500 points, but others aren't far off.


The Book has it's own allies table called 'Allies in the Age of Darkness'
Listed armies are:
- Dark Angels
- Emperor's Children
- Iron Warriors
- White Scars
- Space Wolves
- Imperial Fists
- Night Lords
- Blood Angels
- Iron Hands
- World Eaters
- Ultramarines
- Death Guard
- Thousand Sons
- Sons of Horus
- Word Bearers
- Salamanders
- Raven Guard
- Alpha Legion
- Mechanicum
- Imperial Army
(not saying xenos can't happen, but suggests not)
There are FOUR levels of alliance: Sworn Brothers (can positively affect allies but can't share transports)
Fellow Warriors (No positive or negative effects to each other)
Distrusted Allies (same as fellow warriors but allies may never be scoring)
By the Emperor's (or Warmaster's) Command (same as distrusted but unengaged allies within 6" roll d6 in movement phase, on 1 they are distracted so no action this turn)
An extra paragraph labelled Agents follows. It basically states that in future books in addition to forces shown, some units (exact word) will be described as agents of the emperor/warmaster and are treated as sworn brothers to their respective alliance.

Garro is NOT in the book unfortunately. Loken and Saul Tarvitz are though. Purely speculating, but the note about agents suggests to me that he may appear later in conjunction with his mission from Malcador (for the loyalists obviously) which would be cool for an elite squad of heroes although they'd have to be a Lords Of War option (I may have mistakenly called them gods of war in a previous email, getting confused with a similarly named Horus rule)