When Tournaments Go Bad Before They Start 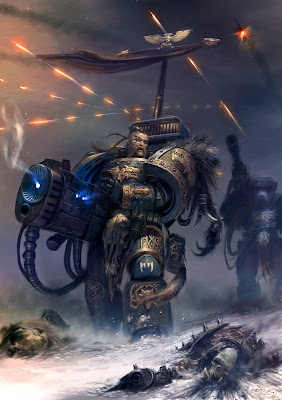 We have talked about this more than once, and yet the trend is getting worse not better. Tournament Organizers changing the 6th edition rules.


You may have started seeing a certain lack of tournament notices here on the site, well, its mostly due to a large number of tournaments that still think they are using all the rules and then not following through. Examples of tournament changes..........

1999+1
For Pete's sake, play a little game. Drop down to 1850 or something if you cannot get yourself over the double FOC charts. Enough drama already. The game is written this way to open it up, allow for a greater divergence of army lists, and get rid of the cookie cutter lists we are still seeing in tournaments that do not allow double focs.

Warlord Traits.
I have heard so many different changes to these, its rather sickening. Changing the way they are picked etc...Changing these almost makes me want to vomit, because it most often does have so little effect on the game. (unless a list is designed to take advantage of them, or the tactics play out on the board).

Terrain
Terrain is most often a problem for TO's, and often because they do not have their hands on enough terrain, or its just plain bad terrain for a 40k table. However, if you want a balanced game, the rules do have the basis for it, simply alternate placements. Time arguments are invalid. Once you have a pool of terrain sitting alongside the table, and set up using this method a few times, it is really quick. Players worried that bad TOs are going to terrain screw them (this happens at most TO placed tournaments) no longer have to worry about with alternating terrain set up.

TO's do yourself a favor, just pick 15/16 pieces of terrain and put it into the terrain pool with each table ( a box at the end or underneath) and let the players do.

Secondary Objectives
What is going on? Really. Why do I keep hearing and reading that these are vanishing? Objective games are much different now and when and how they are placed is an all together changed monster from 5th. This puts a strong importance on other factors of the game... Secondary objectives. Lists should be designed to take these into consideration

Fortifications
Enough said. Just use them.

I know around here its mostly one bad store downtown doing this, and then it spreads like a disease here in my local area. The bad part of this, is it's not just a local phenomena, I read about in a lot of tournament rules that are put online.

Im going to put out the call again.... Any tournament using the rules of 6th edition that wants a front page post, send me an email. TO's that are sending me emails, and changing or not using the rules, please stop asking me to post up on your event (unless of course you want to give 6th edition a chance)
9/29/2012
Natfka
40k, 6th Edition, Tournaments, Warhammer 40k