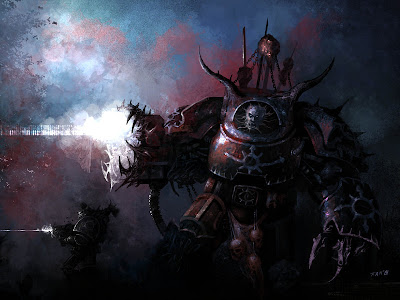 We have another set regarding the Chaos Dragon, terminators, and a siege tank of some sort. Take a look.


Putting an end to this comment section and locking the thread.

Rumor are rumors, but I have just disproved them they are fabrications.

via Faeit 212 (anonymous source)
the chaos dragon will have two shooting profiles:

also terminators will be given a chaos version of a space marine storm shield. And if you now take chosen terminators they will have 2 wounds each.
also the melta vindicator rumour is very much real - but with the two profiles as well.

special rule: enraged daemon: (this rule only applies if you give your melta vindicator daemonic possession) : once per game you can exchange your normal melta shot for a daemonic melta shot.
you may not move in the previous turn to do this ! you shoot ( large blast strength 10 AP 1 shot ) but cannot use your ballistic skill and always scatters 2d6 inches. after doing this then the rules for daemonic possession on the tank is lost for the rest of the game and you must only fire the normal melta shot.

normal melta shot is : strength 8 AP 1 large blast.
this tank cost 150pts to start and an extra 20pts for daemonic possession - NOTE: this tank may NEVER EVER fire at flyers or at a enemy when a member of your army is within 3 inches of the target.
9/09/2012
Natfka
40k, 6th Edition, Chaos Space Marines, Rumors, Warhammer 40k